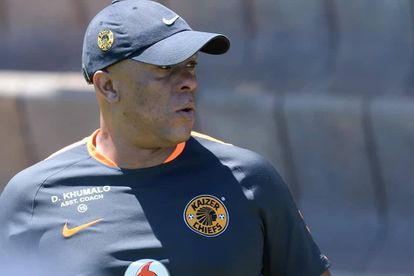 And ‘Romeo’ has since showered Amakhosi great ’16V’ with praise of the highest order.

Kaizer Chiefs legend was as big as Nelson Mandela – Erasmus

“For me, it’s always about appreciating the legends and I’ve good contact with a lot of players that’ve retired that I look to as legends.” Orlando Pirates star Kermit Erasmus said as quoted by IdiskiTimes.

“Lucky Lekgwathi is one of them that I’m speaking to constantly.

“For me, it’s always about showing respect to the legends that have paved the way for us, just like we did with Doctor Khumalo the other night.

“He is an icon, he is an icon. With what he’s done in his career. I don’t think he should work a day in his life anymore because in the early 90s he was as big as Nelson Mandela.

“That’s crazy, coming from the same environments we come from.”

In other news,Kaizer Chiefs legend Doctor Khumalo has lashed out at Premier Soccer League (PSL) players in South Africa.

This comes after not a single PSL player made the cut for the ongoing FIFA World Cup in Qatar.

Bafana Bafana once again failed to qualify for the elite international event while no other player based in the local top flight managed to make the grade either.

Orlando Pirates goalkeeper Richard Ofori is the exception after the Ghanaian was ruled out through injury.

And now, former Kaizer Chiefs wizard ’16V’ has slammed players for lacking desire to feature at the spectacular event.

Khumalo himself played in a FIFA World Cup for Bafana Bafana back in 1998.

“We must not look far, let us look at the players and at ourselves. There have been many World Cups since we last qualified in 2002.” the Kaizer Chiefs legend told SundayWorld.

“We qualified for 2010 because it was held in South Africa and we hosted. We missed the 2014 tournament in Brazil, the 2018 in Russia and this one in Qatar.

“In the early years of Bafana Bafana, we struggled and lost many matches and other countries on the continent were laughing at us.

We knew we wanted to play in the World Cup against the best players. We missed out in 1994, but we made sure.

“The clubs provide everything for the players, they provide the fields, the boots, the balls. The players must answer why they are not at the World Cup. Other players from other countries are raising their game to play at the World Cup.”

And now, Kekana has hailed the Amakhosi midfielder for being ‘brave’ enough to pull that goal off.

Turkey-Syria earthquakes: What has happened