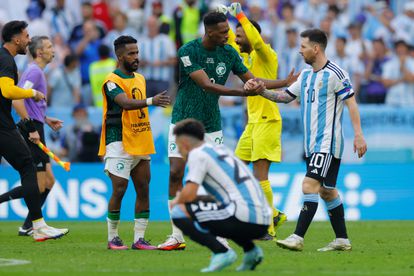 With their shocking loss to Saudi Arabia, Lionel Messi and his Argentina teammates will have to dig deep if they want to win the World Cup.

There is good news though.

Teams to win the World Cup after losing their first match

Three teams in history have FAILED TO WIN their opening game and still gone on to win the trophy. England, all the way back in 1966, started with a draw against Uruguay on home soil and famously won their first and only World title.

In 1982, Italy became the only nation to win a World Cup without winning a single group game. They drew all three matches in the group stage against Poland, Peru and Cameroon respectively, and received criticism for their poor displays. In fact, they only qualified ahead of Cameroon by virtue of having scored more goals than the African nation. The Azzurri went on to beat West Germany 3-1 in the final, though, to claim their third title.

The only team in World Cup history to LOSE their opening game and go all the way to glory is Spain. They claimed their first World Cup crown title in 2010, the first showpiece held on African soil.

Argentina will need to follow that Spanish blueprint if they are to win their first crown since 1986. It’s not out of the question though.