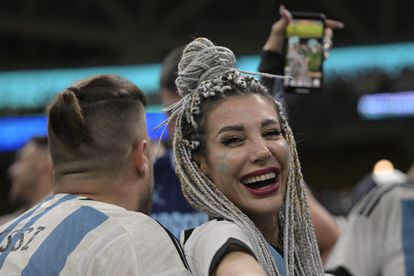 Argentina fans enthralled by the action. It was a classic. Photo by JUAN MABROMATA / AFP)

Argentina fans enthralled by the action. It was a classic. Photo by JUAN MABROMATA / AFP)

World Cup 2022 in Qatar has already produced two classic quarterfinals and we have two more to savour later today.

Before we dig into those, here’s a recap of what went down last night.

Argentina had less of the ball than the Netherlands in the first period, but they used it so efficiently when they were in possession. Messi’s geometrically inch-perfect pass for Nahuel Molina saw the Atlético Madrid full-back put La Albiceleste in front in the 35th minute.

Messi doubled Argentina’s lead from the penalty spot after Denzel Dumfries fouled Marcos Acuña in the area, with the great man making no mistake with the resulting spot-kick on 73 minutes. This was Messi’s 10th World Cup goal, taking him level with Argentinian legend Gabriel Batistuta in that regard. However, The Netherlands mounted an improbable comeback.

Beşiktaş striker Wout Weghorst, on-loan from English Championship side Burnley, got one back for the Dutch ten minutes after Messi’s penalty and then he completed a dramatic comeback with a goal in borrowed time from a smartly improvised free-kick after the 10 minutes of stoppage time were up. It was the latest regular-time equaliser in World Cup history.

Argentina pushed hard for a winner inside extra time, with Lautaro Martínez drawing a great save from Dutch keeper Andries Noppert in the 119th minute after a smart turn. Then, a crisp low driven shot from Enzo Fernández hit the post with virtually Argentina’s last kick of the ball. By the time extra time was completed, the referee had dished out 14 yellow cards. Not the prettiest football match of all time.

Argentina finally prevailed 4-3 on penalties with Lautaro Martínez striking the decisive spot-kick. They will meet Croatia in the semifinals on Tuesday December 13th.

Dogged Croatia get past Brazil

Croatia stifled the Brazilians for much of the contest until Seleção talismán Neymar produced a bit of magic to break the deadlock just before the end of the first half of extra time. However, Croatia weren’t to be denied and they found an equaliser on 117 minutes with their FIRST shot on target.

Neymar’s strike against Croatia was his 77th goal in a Brazil jersey. That means he’s now level with all-time record goal-scorer Pelé. Needless to say, one more goal for the Seleção will put Ney out on his own. However, that will be of little consolation. The Croatians, for the record, have now won their last FOUR shootouts at World Cups.

Argentina and Croatia meet on Tueaday December 13th to tussle for a place in the World Cup final. Messi vs Modric? What a battle that should be.

Nedbank Cup draw: Chiefs and Pirates get away fixtures!

Sharks hoping to use home conditions to their advantage