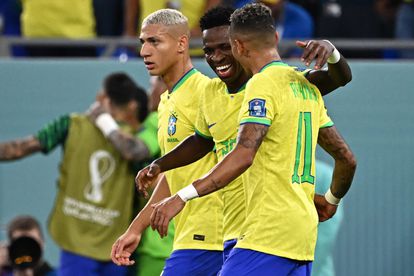 Cristiano Ronaldo is just one of many fascinating World Cup talking points for football fanatics across the globe to dissect.

We’ve all heard about players being called “the next Rolando” and most of the time, that’s a painfully pointless exercise. But bear with us.

Brazilian star has a similar profile to Cristiano Ronaldo

If you’ve ever watched Richarlison in an Everton or Tottenham jersey, you’ll know how feisty he can be. He can sometimes cut a rather sulky figure on the pitch, especially when teammates don’t pass to him, but he’s also a born winner. He’s a fine physical specimen and strong, direct runner, as well as a clinical finisher who’s becoming more of a fox in the box as he matures.

KAIZER CHIEFS: Three FREE AGENTS that the club should be signing in 2023

Richarlison has started his Brazil career like a house on fire

The new Tottenham man now has NINE goals in his last SEVEN Brazil appearances. That’s some serious going. He scored twice on his World Cup debut, becoming the first Brazilian to do that since Neymar in 2014. Not bad at all. Also, did you see that stunning bicycle kick?

Meanwhile, planet football will be watching the great Cristiano Ronaldo and his Portugal side vs Uruguay tonight with plenty on the line in Group H. Earlier today, Ghana claimed a thrilling 3-2 win against South Korea to blow that group wide open. Did you see what James the Jellyfish predicted for tonight’s clash?

World Cup 2022: James the Jellyfish predicts the score in Portugal vs Uruguay