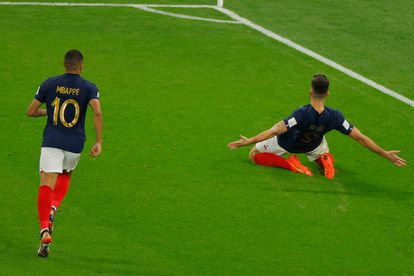 Kylian Mbappé was at his majestic best as France swept Poland aside to reach the quarterfinals at World Cup 2022 in Qatar.

Les Bleus beat Poland 3-1 on Sunday evening courtesy of a brace from Kylian Mbappé and a record-breaking goal from Olivier Giroud.

AC Milan journeyman Giroud has now scored 52 goals for France, taking him ahead of Thierry Henry in the all-time stakes for the French national team. No man has scored more goals for Les Bleus in their history than the evergreen 36-year-old Oli Giroud!

ICYMI: Why Cyril Ramaphosa is an ideal candidate for the Kaizer Chiefs job

Majestic Mbappé does it again on the big stage

PSG superstar Mbappé hit the 63rd brace in the 356th game of his professional career for club and country. He’s also got 13 hat-tricks to his name. Before the match, the 23-year-old was only the second player to have seven career World Cup goals before the age of 24, alongside Pelé. Now he’s got nine goals in the competition.

France is waiting for the winners of England vs Senegal in the quarterfinals. What a tasty match that will be, whoever progresses.