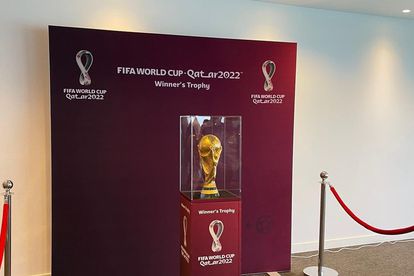 The draw for this year’s Soccer World Cup takes place in the shadow of Doha’s skyscrapers on Friday, 1 April. Photo: Getty Images

The draw for this year’s Soccer World Cup takes place in the shadow of Doha’s skyscrapers on Friday, 1 April. Photo: Getty Images

The draw for this year’s Soccer World Cup takes place in the shadow of Doha’s skyscrapers on Friday, 1 April with the focus for the evening on the actual football after a build-up dominated by the many off-field issues surrounding the awarding of the tournament.

READ | SOCCER WORLD CUP 2022 DRAW: EVERYTHING YOU NEED TO KNOW!

Most controversial World Cup in history

From human rights concerns to the ongoing war in Ukraine, it has been impossible to keep the spotlight solely on the sport, but FIFA president Gianni Infantino has repeated, as he did on Thursday, that it “will be a fantastic and unique World Cup”.

“We never will have another World Cup where eight stadiums are all within 50 kilometres, fans can watch several games in a day and there is no travel for teams,” he insisted ahead of the first World Cup to be played in November and December.

The move away from the usual June and July slot was forced upon FIFA by the heat in the region at that time of year, but the competition is finally approaching and excitement about the draw itself is inevitable.

Friday’s event at Doha’s Exhibition and Convention Center, with former World Cup winners such as Cafu and Lothar Matthaeus among the draw assistants, will have holders France among the top seeds in Pot One.

Germany not among top seeds

That will be comprised of the top seven nations in the FIFA rankings as well as debutants Qatar, at 51st one of the lowest-ranked teams at the World Cup but with privileged status as hosts.

That also means Germany, after their surprise group-stage exit at the 2018 World Cup, are the biggest name in Pot 2, which also contains the Netherlands and Croatia, runners-up four years ago.

African champions Senegal, Japan and Robert Lewandowski’s Poland are among the names in the third pot, and Canada will be in the fourth pot in their first appearance since 1986.

Three places still to be decided

Yet while fans of the 29 qualified nations from around the world will eagerly tune in for the draw, three spots have still to be decided in the last 32-team World Cup before it expands to 48 teams in 2026.

Russia’s invasion of Ukraine is partly to blame. Ukraine’s qualifying playoff semi-final against Scotland was postponed until June as a result, with the winner of that match facing Wales for a place in Qatar.

There are also two intercontinental playoffs to come in Qatar in June, with either Australia or the United Arab Emirates getting to face Peru for one berth and Costa Rica playing New Zealand for the other.

The tiny Gulf state of under three million people stunned the world when it was awarded the hosting rights, and it has been readying itself ever since.

Seven of its eight venues have been newly built, while Doha also opened a new metro system in preparation for welcoming fans from around the world.

Over 800 000 tickets have already been snapped up, and by the time the matches get underway construction should be finished on the promenade on Doha’s Corniche.

However, concerns remain over the treatment of gay and transgender supporters coming to a country where homosexuality is illegal, as well as over the working conditions of hundreds of thousands of migrant labourers in the country, including those who built stadiums.

Thursday’s FIFA Congress in Doha saw Lise Klaveness, head of the Norwegian Football Federation, speak out to say that the 2018 and 2022 World Cups had been awarded “in unacceptable ways with unacceptable consequences.”

“Human rights, equality, democracy, the core interests of football were not in the starting XI until many years later,” she said.

“There is no room for employers who do not secure the freedom and safety of World Cup workers.”

The chief executive of Qatar’s World Cup Supreme Committee, Hassan al-Thawadi, countered by saying he was disappointed that Klaveness had made no attempt to talk to Qatari authorities before speaking out.

He said the first World Cup in the Middle East would leave “truly transformational social, human, economic and environmental legacies.”