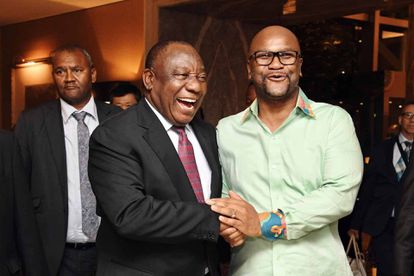 Ramaphosa’s team is NOT even in the PSL…

According to the OperaNews website, Ramaphosa is a Black Leopards fan.

They are currently in the National First Division (NFD) after being relegated from last season’s DStv Premiership campaign.

Ramaphosa grew up in Limpopo which is why he is a loyal Leopards supporter.

Amidst voting season it is always interesting to find out which teams have our leaders vote. It was recently revealed that DA leader, John Steenhuisen is an AmaZulu supporter whilst EFF figurehead Julius Malema is an Orlando Pirates fan.

Leopards ended their poor run of six games without a victory this past weekend – a run that included 2 draws and 4 losses in a row.

Ramaphosa’s team beat Platinum City Rovers 2-1 at home on Sunday in the NFD.

Arthur Zwane protects under pressure Ashley du Preez: ‘He is a big boy’