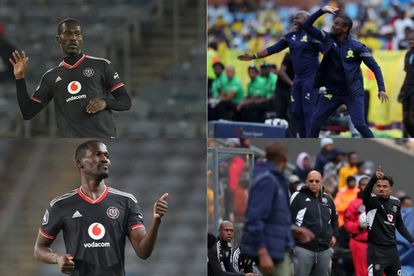 Xoki received a high-five from a member of the Pirates technical team as he left the field after being red carded in the Carling Black Label Cup final.

Xoki spent much of the game acting as the Orlando Pirates enforcer.

He also had a running battle with Gaston Sirino and Xoki was winning fans.

Few could argue that he didn’t deserve to be sent off against Sundowns but plenty of Sea Robbers like what they see from Xoki.

However, that number does not include Rhulani Mokwena.

Mokwena appeared to clash with former Sundowns striker Kermit Erasmus on the touchline and afterwards explained his actions.

“I’m very disappointed because the tackle was not something you don’t want to see from an opponent,” said Mokwena as per Times Live.

“Career-threatening situations like that shouldn’t be applauded, it was just a bit of a disappointment.

“I was disappointed at how he [Erasmus] spoke to me – I just felt I didn’t deserve that and especially from him.”

Mokwena appeared to be more upset with Erasmus than Xoki.

“Maybe that’s why I feel in this moment bittersweet. Because I know what the club [Sundowns] has done for him and what I have personally done for him,” Mokwena continued.

“I cannot sit here and speak about some of the things but it’s OK – I suppose that’s what life is about. We take it in on the chin and we move.”

Mamelodi Sundowns head into the World Cup break sitting pretty. They are atop the Premiership and looking forward to another Caf Champions League campaign.