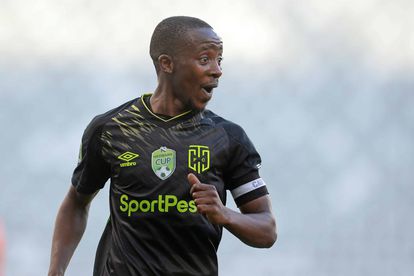 Cape Town City captain Thabo Nodada has long been linked with a possible move to Kaizer Chiefs but there appears to be a new twist.

On Tuesday, a report emerged that Nodada could be making a shock move to AmaZulu, and this raised a few eyebrows.

But will Nodada be committing a career suicide by snubbing Chiefs for a move to AmaZulu?

AmaZulu have become a force to be reckon with in the PSL this season, and the takeover of Sandie Zungu as their chairman has motivated the players to do more.

Nodada’s working relationship with Benni McCarthy could be a big factor in him deciding to turn a blank eye on Chiefs’ interest.

However, at 26, Nodada should be smart when making that decision on his future, and there are several factors to consider.

While AmaZulu are a big team in their own right, they cannot campare to ‘The Big Three’ of South African football in Chiefs, Orlando Pirates and Mamelodi Sundowns.

Furthermore, he may go on to sign a three-year deal with AmaZulu IF it happens, and he could find himself having to want to secure a move to a big Gauteng club in the twilight of his career.

READ | KAIZER CHIEFS | THE ONE MANDATE GAVIN HUNT STILL HAS TO FULFILL!

Chiefs may be struggling this season, but they are likely to be back with a bang next season as Gavin Hunt’s project is set to take shape with some exciting signings.

And if he chooses AmaZulu, that could be a missed opportunity for Nodada to be associated with a big brand like Chiefs, and he could live to regret that decision in years to come.

Nodada is definitely at the peak of his career, and it is through moving to a big club like Chiefs that his chances of going abroad would be enhanced.

He could also be a regular at Bafana Bafana, and not just be called up for less fancied international friendlies as this has been the case in recent years.

Nodada would have the chance to become a superstar in the mould of the likes of Jabu Pule, now known as Mahlangu IF he joins Chiefs.

However, the final decision on his future definitely rests with him but one thing for sure, Nodada will not come cheap as he’s recently signed a new four-year deal.