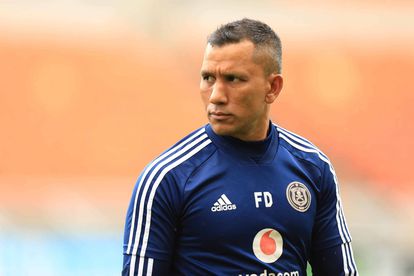 Ghanaian striker Kwame Peprah was hauled off at half time by Orlando Pirates co-coaches Fadlu Davids and Mandla Ncikazi in their game against Baroka FC on Thursday evening.

Prepah got yet another rare opportunity to lead the Pirates line, but found himself hooked at half time by Davids and co.

In a game where Pirates missed so many chances, the quality of their striking forces was always going to come under scrutiny. Davids and Ncikazi once again showed faith in Prepah, in hope that he would get amongst the goals for the first time in the league in the black and white of Pirates, but instead, would find himself not returning to the pitch for the second half.

Despite Pirates’ heavy dominance, the forwards inabilities, including, that of Prepah to score that crucial goal, would’ve probably weakened his case with regards to Davids and Ncikazi who then decided to bring on the more experienced Bafana Bafana international Tshegofaso Mabasa in place of the 20-year-old.

Davids has since attempted to explain the thought process behind taking Prepah off.

“Peprah did well in terms of getting into good positions and by creating that focal point, but then the touch or the support close to him was not really there,”  Davids said

“We thought at half-time [that we needed] somebody slightly more mobile to give us both options by being the focal point [and being able to ] sneak in their defensive line. Sometimes you need that movement in behind the line also. We thought Mabasa brought that extra dimension to what Peprah would do, hence the substitution, but we are happy with his performance and with his contributions so far.” He continued

Davids then admitted that Prepah could’ve done better in some instances in the game.

“Yes, there were some opportunities that he (Prepah) could maybe have done better with but it was just a tactical change, something different when we need more movement and giving us that focal point, which Mabasa brought.”  Davids concluded