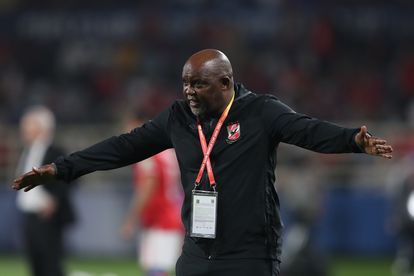 Pitso Mosimane likely didn’t do much good for his chances of a return to Mamelodi Sundowns when he led Al Ahly against his former team last season.

Mosimane wasn’t able to defeat Sundowns last term and it might have contributed to his eventual sacking. He bemoaned the co-called ‘dirty tricks’ used by the club and made no friends in the process.

Now Pitso Mosimane has agreed to coach Al-Ahli Saudi FC ensuring he will coach outside of Africa for the first time.

Mosimane wasn’t happy that Mamelodi Sundowns, not only fail to respect his achievements for the club but show poor sportmanship.

“There is always drama when I come here. There’s too many things that are personal to me,” Mosimane said in March while still in charge of the Egyptian giants.

“It is unbelievable, I don’t want to talk about it now. I will talk about it in my book or in my documentary and you will be shocked. They are still after me these people, they will not leave me alone – I have moved on. I have left them with a very good team, they have three coaches. What do they want? They won! I did my best at the team and I am gone. What do they want to achieve? It’s very dirty and I will reveal it all one day, there is a lot. There’s one person behind this and you guys know the person.

“I don’t have a problem with the match. They won fair and the goal was legitimate, even in Cairo, they won fair. The game is played on the pitch. I am strong, they cannot break me or deal with me. I was at Sundowns many years ago. I was there during the time of Dr. Itsweng, during the time of the Krok family – I played for the team.

“Even during the Tsichlas family and the current owners, I was there. Why use underhand stuff and other things? They are a big team, it’s very sad and I don’t know what to do. But I do not want to make excuses, we did not lose because of all those things in the background. In football, I am strong and powerful. We just have t0 win our two remaining matches in Cairo,” Mosimane concluded.

Those comments made it unlikely Mosimane would return to the Sundowns dugout.