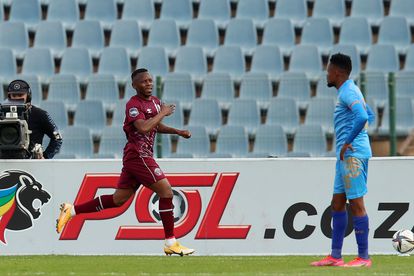 Mbulelo Wambi of Swallows FC celebrates goal with teammates during the DStv Premiership 2021/22 match between Swallows and Royal AM on 22 August 2021 at the Dobsonville Stadium, Soweto ©Muzi Ntombela/BackpagePix

Mbulelo Wambi of Swallows FC celebrates goal with teammates during the DStv Premiership 2021/22 match between Swallows and Royal AM on 22 August 2021 at the Dobsonville Stadium, Soweto ©Muzi Ntombela/BackpagePix

Mbulelo Wambi got on the end of a tidy cross from Lebohang Mokoena to head Swallows into the lead in the final minute of stoppage time against Royal AM on Sunday.

Both sides struggled to create clear-cut chances for much of the game, and it appeared as though they would be content to settle for a point apiece, however, Swallows remained switched on until the last moment and snatched the three points.

Mokoena laid on the goal, making amends for spoiling a gilt-edged chance in the first half after Dillion Solomons beat his marker on the left wing and played a cut-back that needed nothing more than a touch to steer it home, but the midfielder couldn’t get there.

While Royal AM burst forward from time to time Virgil Vries was rarely tested in the Dube Birds goal.

The former TS Galaxy man, Wambi had come off the bench to make his Swallows debut and became the fourth player this weekend to score on their first appearance for their club. He was alive to the chance and made the most of a free header, with the Royal AM defenders caught ball-watching.

Swallows can count themselves lucky to take three points from this game which was for 92 minutes a dour affair.