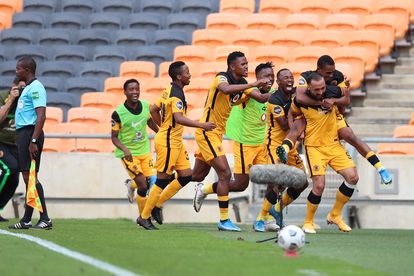 Samir Nurkovic’s over-head bicycle kick in the Soweto derby has earned him the DStv Premiership Goal of the Month.

Watch below as the Serbian star scores his first-ever derby goal for Amakhosi.

“The feeling is amazing especially because the goal came in such a special game,” said a beaming Nurković on receiving the award. “It’s great to score in a big game like the Soweto derby.  The only thing that was missing that day was the fans. I would have liked to have scored in front of a full FNB Stadium, nevertheless the feeling is amazing.”

Samir Nurkovic reacts to winning Goal of the Month award

Having put Pirates to the sword effectively was redemption of some sort for Nurković who had missed a penalty in the earlier derby between the sides as Chiefs fell to a 2-1 loss. He was more than pleased to have made up for that missed chance by scoring the game winner.

“I got a lot of messages from the fans after the game saying they forgive for missing the penalty in the other match against Pirates,” reflects Nurković before adding, “It all boils down to great team work, but was really happy to have scored in such a big match.”

Scoring against Kaizer Chiefs’ arch-rivals was the accomplishment of a lifelong ambition for Nurković who had also wished to feature in a game as big as the Soweto derby. The goal was historically significant as it came in the 100th league meeting between the Soweto rivals and the match was also the 50th league meeting between in the PSL era. Nurković became the first European born player and first Serbian to score for Chiefs against Pirates.

“The first fulfillment of my dreams was to play in front of a big crowd,” he confesses. “That happened last season when we played in front of 90 000 plus fans in the derby. This was the second one, but to score in this game it definitely fulfills my ambition. It was a dream come true.”