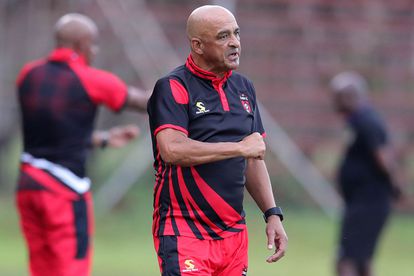 And now Da Gama has set his sights on a striker who is able to lead the line.

“Any coach will tell you that he’ll always want more and want better,” said the TS Galaxy coach according to TimesLIVE.

“There’s one more player I think we can still sign outside the window who is out of contract.

“Let’s see what’s happens, but otherwise we are happy and satisfied with who we signed.

“The only thing is that you’ll never know who’ll come through immediately because it takes time for them to acclimatise.

“We’ve signed the strikers, but we understood it’s going to take time for them to settle in and understand how we play.

“Last season we played very well against a lot of teams, but we couldn’t score. So we thought maybe that’s the department we need to beef up,” Da Gama said.

TS Galaxy finished ninth in the 2022/21 standings having scored just 26 goals in their 30 matches for an average of under a goal per 90 minutes.

They leaked 31 goals giving them a final goal differential of negative five which ultimately cost them dearly as they finished tied with eighth-placed Kaizer Chiefs on points, but lost out due to Amakhosi’s superior minus-three differential.

“It’s an important time for us to try and sharpen up the attack and try and improve wherever we can.

“We really needed this time and we are going to utilise it to the best of our ability,” Da Gama concluded.

TS Galaxy held Kaizer Chiefs to a goalless draw in their opening DStv Premiership match of this season at home before losing 1-0 away to Stellenbosch FC.

They will next be in action against Golden Arrows at the Mbombela Stadium on Saturday, 11 September.