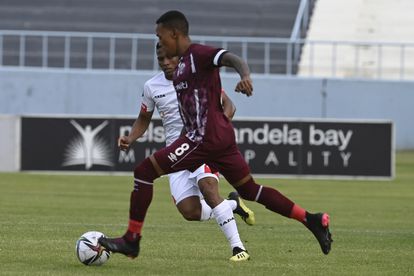 Mere was suspended by the club before for alleged misconduct towards the end of last year, which was expected to lead to his departure from the club, with some speculation suggesting he could retire.

READ | ITUMELENG KHUNE RETURNS TO A FRESH START AT A NEW CLUB!

However, at the start of this year, Swallows CEO Sipho Xulu would not confirm if the club was parting ways with Mere, and revealed to the Sowetan Live that there was an internal investigation going on.

“The matter is not finally resolved and I cannot confirm if he has left the club,” Xulu told Sowetan.

“It is still an ongoing thing between the employer and the employee and concerning both parties, we cannot share with the public. But it should be finalised soon in the next few days.”

Now, according to FARPost_ZA, Mere is set to remain part of the Swallows setup after his disciplinary matter was finalised this week, and he will soon be back at training.

Mere has been with Swallows since September 2019 and was a prominent figure last season, missing just four games as the club finished sixth in their first campaign in the DStv Premiership.

READ | KAIZER CHIEFS SET THEIR SIGHTS ON FORMER PSL PLAYER OF THE YEAR!

Yet, this season he has only played six games, with his last appearance was in October against Chippa United.

The relationship between Mere and Swallows then collapsed among allegations of misconduct, but now it appears all is not lost.

The 37-year-old, who was born in Bloemfontein on March 5 1984, made his pro debut at just 17-years-old for now defunct Hellenic. In 2004, he signed for Mamelodi Sundowns who later loaned him to Swallows, in 2011.

Video: Mercedes-AMG One like you’ve never seen it before