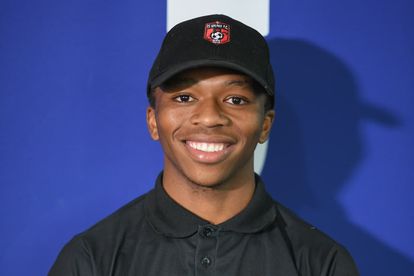 TS Galaxy have extended the contract of one of their rising stars who took the PSL by storm soon after his promotion to the first team.

Aphelele Teto is the youngster who’s been on everyone’s lips since making his professional debut earlier this month.

And with the hype around him over his potential to be one of the best players in the league, TS Galaxy have moved swiftly to tie him down.

TS Galaxy took to their social media platforms on Tuesday to confirm Teto’s contract extension although they didn’t reveal the length of the new deal.

Teto is a 18-year-old left-footer who plays as an attacking midfielder. He has been with TS Galaxy for some time now.

He started at the club’s development before his promotion to the TS Galaxy first team this season.

Teto showed his real quality as a young player during the 2021 Engen Knockout Challenge while playing for TS Galaxy.

He also featured for the club’s DStv Diski Challenge (DDC), and it was coach Sead Ramovic who handed him his PSL debut against Mamelodi Sundowns on 2 March 2022.

Teto has featured in three matches for TS Galaxy thus far, but he’s yet to find the back of the net or register an assist for the first team.