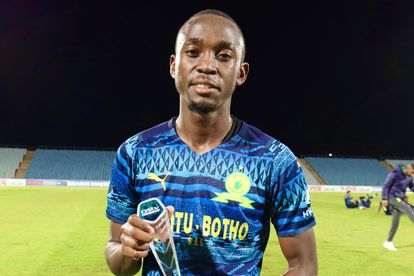 Shalulile has five more matches of Mamelodi Sundowns’ 2021/22 season in which to rewrite the history books.

Thanks to his hat-trick against Golden Arrows on Tuesday, Shalulile took his tally for the season to 21, seven more than closest rival Victor Letsoalo of Royal AM.

Second-most is the 22 goals Zimbabwe’s Wilfred Mugeyi scored in the very first PSL-era season in 1996/97 for Bush Bucks who finished fourth that season.

However, in that season there were 18 teams – and 34 matches played per team – unlike today where the 16 teams play 30 matches.

Peter Shalulile’s tally is currently tied with South Africa’s Pollen Ndlanya who scored 21 goals for Kaizer Chiefs in the 1998/99 season which was also a 18 team / 34 match campaign.

Be sure to stay glued to The South African website for ‘LIVE’ coverage of Peter Shalulile’s quest for the Lesley Manyathela Golden Boot.

Beckham does Mariah: Icon sings “All I want for Christmas” [Video]