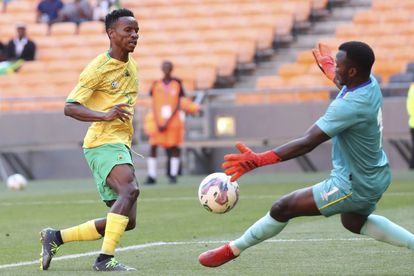 Mamelodi Sundowns midfielder Themba Zwane has spoken out after playing his first match for Bafana Bafana under Hugo Broos’ leadership.

The 33-year-old midfielder bagged a brace in South Africa’s 4-0 victory over Sierra Leone in their international friendly last Saturday.

ALSO READ: SWALLOWS GIVE UPDATE ON THE CLUB’S SEARCH FOR A NEW COACH

It felt like he was serving humble pie to Broos who has overlooked him since taking the reins as Bafana Bafana coach last year.

And after the match, the former Cameroon coach admitted that Zwane was the “missing link” in the national team all along.

‘Mshishi’ says he wasn’t playing to prove a point to the Belgian coach, but that he was “enjoying” representing the country.

“Not at all. I was just enjoying my game and showing appreciation for the call-up. It had been long since I got a call-up and that’s why I did my job,” Zwane said as quoted by TimesLIVE.

“All I can say is coaches have different philosophies. I think maybe the style of play [of Bafana under Broos] suits me. But obviously I need to keep on pushing. There are more games coming and I need to do well for my team [Sundowns] so I can keep being called up for the national team.

“It felt good to be back in the national team. I was happy to respect the coach’s decision and wait for my chance to come — and it came.

“Being in the camp with the guys and the understanding we have — because some of my Sundowns teammates told me the camps were good and the feeling has been nice — I’m enjoying myself.”