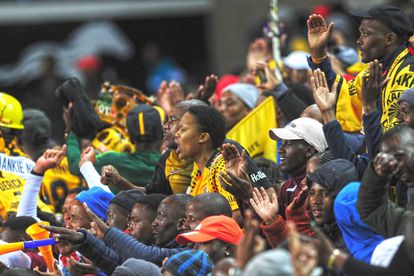 This year’s Carling Black Label Cup has undergone radical changes with four teams rather than the usual two in action next weekend. Photo: Ryan Wilkisky/BackpagePix

This year’s Carling Black Label Cup has undergone radical changes with four teams rather than the usual two in action next weekend. Photo: Ryan Wilkisky/BackpagePix

It probably won’t surprise you that the Soweto Derby doesn’t produce an awful lot of hat-tricks.

But the actual number is probably even smaller than you thought. In its history, arguably the continent’s biggest derby clash has seen just three trebles scored.

ALSO READ: Chiefs vs Pirates: Five things to look out for in the 176th Soweto Derby

Even though Soweto Derby clashes in 1970s were high-scoring affairs, there has not been a treble netted in matches between Orlando Pirates and Kaizer Chiefs in 26 years. Here’s a look at the trio of trebles we’ve seen.

Hat-tricks in the Soweto Derby

Zimbabwean striker Ebson ‘Sugar’ Muguyo rubbed salt into the wounds of Orlando Pirates when he bagged the very first Soweto Derby hat-trick in a BP Top 16 semi-final replay in 1975. Muguyo would go on to score nine derby goals, placing him fifth on the all-time list for Chiefs.

Second-half substitute Henry ‘Mthofi’ Khumalo was the hero of the Champions of Champions final second leg in 1981 when he engineered a staggering turnaround. Khumalo well and truly turned this game on its head after being introduced as a substitute to bag a hat-trick in the second half to give the Buccaneers a 3-2 aggregate win.

Hat-tricks in derbies are remarkable as it is, but this one surely takes the cake. Chiefs were a goal up from the first leg at a packed Orlando Stadium before extending their aggregate lead when Peter Mokotedi scored right after the break. One of the most sensational turnarounds you’ll ever see in African football.

The last hat-trick in a derby match was scored 26 years ago as Jerry ‘Legs of Thunder’ Sikhosana fired Pirates to a 4-1 rout over Chiefs in the 1996 Bob Save Super Bowl semi-finals.

Will we see a hat-trick on Saturday? The stats say no but the optimists say yes.