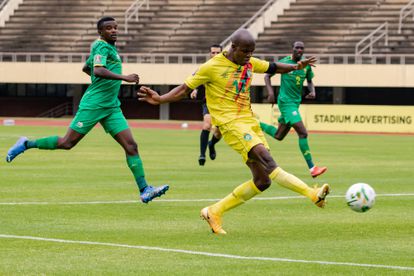 Kaizer Chiefs have ONE former player, an Amakhosi legend that is close to the heart of all their fans who will be playing at this years AFCON.

Representing Zimbabwe (and no, it’s not Khama Billiat), is PSL and Amakhosi legend… Knowledge Musona!

Musona will be leading his country out in Group B. His side have been drawn alongside 2019 finalists, Senegal, Guinea and Malawi. Zimbabwe’s attacking midfielder is a true Amakhosi icon with truly mind-blowing stats for Chiefs!

WATCH: JULIUS MALEMA SHOUTS AT THE THE PSL! – ‘THAT IS ABSOLUTE NONSENSE!’

The 31-year-old featured 88 times for Chiefs, scoring 40 goals and assisting 13 according to TransferMarkt.

He is set to lead out his country against Senegal on Monday in his side’s opening match. Musona is widely respected amongst PSL fans for his contributions to Chiefs.

READ | SIPHIWE TSHABALALA ON THE BRINK OF HUGE PSL RETURN!

Now, he is heading towards the end of career with the pride of his nation and the support of Amakhosi’s fans behind him.

Another Chiefs man that is supporting Musona is Billiat.

Billiat retired from international football but will be rooting for his home nation.

Musona is looking at making history with Zimbabwe, as he aims to lead them to the knockout stages of AFCON for the first-time ever.

READ | KAIZER CHIEFS LATEST: HAVE AMAKHOSI MADE A U-TURN ON DUMISANI ZUMA?