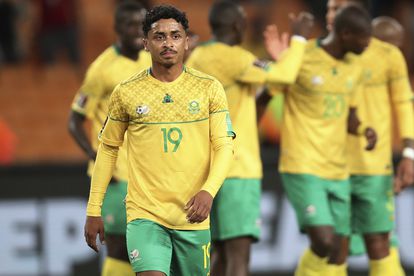 Kaizer Chiefs dominate the headlines like no other club in South Africa and we have all the latest from Naturena.

Here we take a look at all the stories featuring the Glamour Boys on the pages of the South African and elsewhere.

Bafana Bafana midfielder Ethan Brooks has made a transfer confession regarding Chiefs whom he was linked with before he signed for AmaZulu.

Brooks opened up on the events that led to his signing for Amazulu ahead of Arthur Zwane’s operation.

Club supremo Kaizer Motaung is one of the most influential men in South African football.

Heading up the biggest club in the land means posing for a few photographs and that was no different when he turned up to UCT to receive an honorary doctorate..

CHECK OUT THE GALLERY HERE

Kaizer Chiefs signed Lehlogonolo Matlou from Swallows FC this window, not much is available from his time with the Dube Birds.

However, we have something from Matlou’s spell in Portugal.

Who will be Kaizer Chiefs next captain

Who will be Kaizer Chiefs next captain?

The South African’s Dean Boyle takes a close look at the options.

They will represent Bafana Bafana during their upcoming CHAN Qualifier against Comoros.

Kaizer Chiefs’ axed goalkeeper Daniel Akpeyi is clubless since he was let go by Amakhosi in June.

Kaizer Chiefs to miss out on these targets

Kaizer Chiefs have been linked to every man and his dog in this transfer window.

We are, however, relatively sure that these players won’t be headed to Naturena.

Often accused of ruining players careers, this man says nothing could be further from the truth.

Retired Kaizer Chiefs and Mamelodi Sundowns striker Kenny Niemach has commented on what is important for Arthur Zwane as coach of Amakhosi in the new season.

Zwane was appointed as the new Chiefs coach on a three-year deal in June, and his appointment saw the management go all the way to bolster the squad with eight new players.

We have seen legends come and go from Soweto in recent weeks.

Kaizer Chiefs legend Itumeleng Khune may be the next icon to leave after Happy Jele’s shocking exit from Orlando Pirates.

Kaizer Chiefs are likely to finish ahead of bitter Soweto rivals Orlando Pirates in the 2022/23 DStv Premiership season – if bookmakers are to be believed.

However, there will be no denying Mamelodi Sundowns a sixth consecutive PSL title.

Kaizer Chiefs say no to trialist

Since last season concluded, Chiefs have dramatically overhauled their squad, and not only have several new players been welcomed to Naturena, but a number of others are also said to be on trial.

However, one player trialled has failed to make the grade.

Another striker offered to Kaizer Chiefs

According to the publication: “Sources have revealed that his handlers have offered the centre-forward to Sekhukhune United, Orlando Pirates and Kaizer Chiefs.

“Yannick Makota, who has plied his trade globally, is a Cameroonian-French striker who was last on the books of Hapoel Umm al-Fahm, a club that features in the Israeli Liga Leumit.”

A former Chiefs player believes that fans of the club can be toxic.

He says that many are bitter and prayed for his downfall after his depature.

We doubt Kaizer Chiefs have been linked with so many strikers in one window before.

There’s a fourth one from Lesotho.

Don’t sign a striker just for the sake of it

Kaizer Chiefs legend Shane McGregor has weighed in on the club’s search for a quality striker ahead of the 2022-23 PSL season.

Amakhosi are in the race against time to replace Samir Nurkovic and Leonardo Castro whom they let go at the end of last term.

Trialist on the mark

What else can you wish for as a striker on trial?

A Kaizer Chiefs hopeful trialist has found the net during a friendly game.

Kaizer Chiefs coach Arthur Zwane is truly a different person behind the scenes.

Watch him advising a youngster about showboating here.

A son of an Orlando Pirates legend is making waves at arch-rivals Kaizer Chiefs, and appears ready to make a name for himself at Naturena.

The progeny of the Sea Robbers winger is set to blow up next term.

Is this new Kaizer Chiefs fullback the best in the land?

Kaizer Chiefs are lining up a very special match with opponents from overseas in what would be a landmark and historic occasion for both clubs involved.

The South African’s Dean Boyle has the story.

International not headed to Kaizer Chiefs for trials

It appears that Sierra Leone international Musa Kamara will not be heading to Kaizer Chiefs for trials as some rumours suggested.

The club is currently in the market for at least one striker or two as replacements for the departed Samir Nurkovic and Leonardo Castro.

The most valuable Glamour Boys

According to the latest valuations, there are changes in the pecking order at Naturena.

Find out the top five most valuable players in the current squad.

Zitha Kwinika opens up on his return to Kaizer Chiefs

Zitha Kwinika returned to Kaizer Chiefs after seven years away.

The defender has opened up on what it is like to be back.

“The move back to Chiefs came about as a result of my hard work from the previous season. It was on the cards and the team recognised it was time for me to come back again. I’m in a good state and ready to represent the team again,” he told the club’s official website.

“It’s going to be a great season. It’s not only about me, but about the group at large. Everyone in the team knows the pressure there is to come to rectify what has happened at the Club. It’s high time now for the Chiefs faithful to have a smile on their face. It won’t be an easy journey, it’s important that everyone comes together as a group. If we do it as a team, there’s so much potential, so much quality in this group that I don’t see anything or anyone that can stop us. It’s a case of getting together and making the Khosi faithful happy again,” he added.