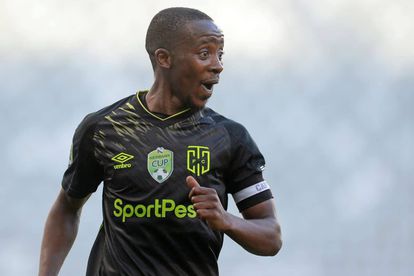 Cape Town City captain Thabo Nodada has, for the first time, broken his silence on rumours that he was close to joining Orlando Pirates.

Nodada confirmed that there were indeed talks between Pirates and City but the two parties couldn’t agree terms for him to move to the Soweto giants.

And in as far as he knows, Nodada said that’s where his proposed move to Pirates fell through on transfer deadline day.

“I know there were discussions, but I know also there was no agreement. So, it was always just discussions and nothing more,” Nodada tells KickOff.

“As a result, nothing ever came to me as sort of communication from Pirates except a chat with the chairman John Comitis.

Nodada further confirmed that City chairman John Comitis informed him of the Pirates interest and his intention to make the deal happen.

And while he was previously linked with Kaizer Chiefs, Nodada said he didn’t have a problem with the proposed move to Pirates.

In fact, the speedy attacking midfielder said he was willing to join the 2013 CAF Champions League finalists.

“The chairman did inform me that he was trying to make a deal, but it didn’t happen,” he confirmed.

“I think I didn’t have a problem with the move to Pirates at all. If all parties were happy with a deal, then I would be happy.

“So, yes, I was willing to complete a move to Pirates,” added Nodada.