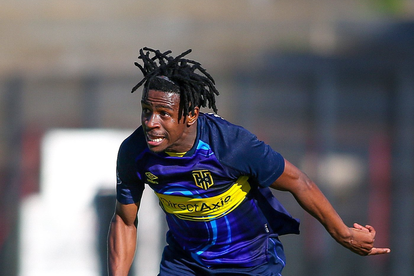 Cape Town City FC left back Terrance Mashego has added further fuel to the rumours that Kaizer Chiefs have made an offer to him.

Mashego has been a key player thus far, often seen marauding down the left flank for City, and it is now said that Chiefs have also noticed.

Mashego pulled out of Bafana Bafana squad due to injury

In fact, Chiefs will know all about Mashego having witnessed both his defensive and attacking work. The speedy wing back was one of the goal scorers in a 2-1 victory over Amakhosi at FNB Stadium. With the season that he has had, that has equally seemed to catch the attention of Bafana Bafana coach Hugo Broos. He has since found himself as a member of the national team and was originally called up to the squad that lost the first 2023 Africa Cup of Nations qualifier against Morocco away in Rabat.

It had emerged on Monday that Chiefs had made an offer for Mashego, but it had also emerged that City had exercised their two-year extension on his contract. That then means that Amakhosi will have to folk out what would be expected to be a hefty transfer fee for the soon to be 24-year-old. The player himself has since fuelled the rumours with his latest comments on a potential move to the Glamour Boys.

“As a footballer, you want to see yourself grow and challenge yourself on different levels. It would be an outstanding achievement for me to play for a much bigger club to test myself on a different level,” Mashego said to Soccer-Laduma.

Chiefs are currently overseeing a complete squad overhaul having released 10 players from the first team, as well as put one in Akumu Agay on the transfer list. In turn, they have already snapped up three players in Siyethemba Sithebe, Zitha Kwinika, Ashley du Preez, with the arrivals of Yusuf Maart, Kobamelo Kodisang, Dillon Solomons and Kamohelo Mahlatsi all said to be imminent as well. It is also thought that they are interested in signing TS Galaxy centre back Given Msimango. If they can add both him and Mashego, Chiefs could be a very hard team to beat next season.