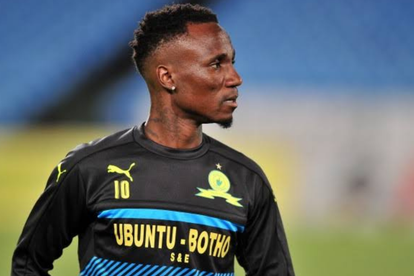 This will no doubt shock and upset many Kaizer Chiefs fans. But oh well, football is an emotional game, as we all know. Teko Modise has chosen his local football hero from the long-running public debate: Themba Zwane or Doctor Khumalo.

As a distinguished thinker and eloquent guy in the game, Modise laid down some rather solid reasons why Khumalo comes second behind “Mshishi.”

Modise shared his thoughts while appearing as a guest on Mzansi number one podcast, MacG podcast on Thursday night. The host asked the former Orlando Pirates and Sundowns star to simply choose his best talent between Zwane and the long-retired Khumalo.

Without much pondering, Modise simply said Khumalo is second to Zwane. He acknowledged Khumalo’s class and legacy before explaining how the younger Zwane came on to hit higher echelons.

“I’ll tell you this, Doctor paved the way for footballers like us, to understand what it is to be a brand and how to be a brand when you’re a footballer. Doctor is the guy,” Modise said.

“Doctor made football fashionable, he made it stylish. He made us want to play the game itself.

“What Themba Zwane is doing right now, he has set the trend and benchmark to dominate as a player for an extended time. It is very difficult to dominate for such a long time.

“I think Mshishi has been dominant for four or five years. Playing the way that he does is not easy and I know the struggles that come with that dominance.”

“I watched Doctor play. With Themba Zwane, I played with him.”

“I think the Brazil game (Bafana Bafana 2-3 Brazil in 1996), was one of his best-ever performances, one of them. He put Brazil in his pocket,” Modise added.

“It would be disrespect for Doctor. There is no modern-day Doctor. What he did was never done before. Some players are good in this era and that era. Doctor was just good, period.

“Some might disagree with me but as a person that played the game, for me he is one of the best ever players in the country.”

So there you have it, a legend like Modise, who played with a similar style, has picked Themba Zwane over Doctor Khumalo, end of the story.

WATCH – Teko Modise: ‘Why I chose Pirates over Chiefs’