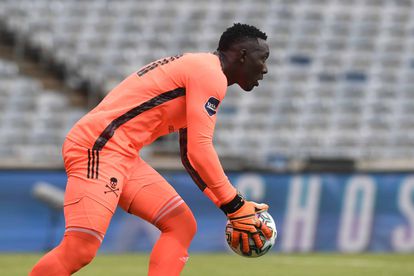 Swallows and Pirates are set to renew their historic rivalry this coming weekend, but Swallows chairman Mogashoa has already began with the mind games it would appear.

Mogashoa is known to be extremely active on Twitter

Known to be a vocal character on Twitter, while many had their Bafana Bafana hat on, Mogashoa appeared to not leave his Swallows hat, and seemingly never stopped having his club side’s next opponents in sight, which are Pirates. True to the saying “Never keep your eye off the prize” he couldn’t help but notice a locally based Ghanian player struggling against Bafana Bafana.

The player in question was of course Pirates keeper Richard Ofori. The Black Stars shot stopper was not having his most convincing display in the colours of the Ghanian national team and almost gifted Bafana Bafana an opening as a cross from the right-hand side of the field, found its way through him, only for Baroka FC target man Evidence Makgopa to fail to convert a sitter within mere centimetres of the goal line.

That miss would let Ofori off the hook with regards to the scoreboard and has national colleagues but it would not let him escape the banter of Mogashoa. The Swallows boss would then tweet, a picture of a person holding a big candle, a symbol of prayer with the caption “For the Goal Keeper to be healed and match ready on Saturday…” referring to Ofori being fit for Pirates. In the comments, he then responded with a picture of a road, which can easily be interpreted as the “N1”. A description used to describe an easy route to goal in football circles.

Prior to that, Ofori was constantly going down to the floor to receive medical assistance, and that did not escape Mogashoa’s vision too. He then tweeted “Best way of avoiding Gamildien”. That was referencing how the veteran Swallows forward beat Ofori with two well taken goals when the Birds knocked Pirates out of the MTN 8 cup last month.

He was far from done

Mogashoa was not done there, however, as he returned to tweet about Ofori’s ‘injury’ after Makgopa’s miss. the ball that found Makgopa came through the legs of the Pirates keeper and could’ve been an embarrassing moment had the on loan Orlando Pirates striker netted. When Ofori stayed down afterwards, the Swallows chairman said “ Spy twos are like that. They leave you “Injured” out of embarrassment” insinuating that Ofori was not really injured.

Will Pirates have the last laugh?

Will Mogashoa’s mind games help Swallows get another victory over Pirates? Or will they only serve as motivation for Ofori to produce a masterclass for the

Buccaneers? Watch the space. But for now, here are the tweets below: