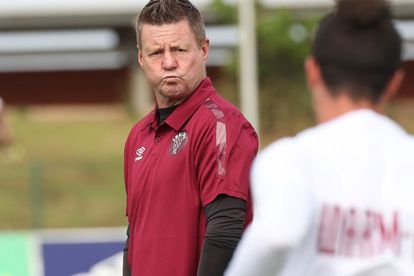 A humiliating 4-0 defeat to Golden Arrows in 17 September infuriated Birds fans who expressed their displeasure with Kerr as he made his way down the tunnel after the match.

ALSO READ: LYLE LAKAY ON MAMELODI SUNDOWNS EXIT: ‘IT WAS A SHOCK TO ME’

It was clear that the 55-year-old was unlikely to return for the club’s next match – and he was indeed shown the exit door a few days after.

However, Mogashoa says the defeat to Abafana Bes’thende wasn’t the only reason for Kerr’s sacking.

They also took into account previous poor results before the trip to Durban.

“I sympathise with coach Kerr, I want to appreciate and thank him for what he is done for the club,” Mogashoa said in an interview with Marawa Sports Worldwide.

“And I honestly don’t think if he had won against [Golden] Arrows the decision would have been made because we have a performance contract.

“There are deliverables in those contract so he would have met I expected from him had he won the match. There would be no reason for me to fire him unfortunately.”

‘DECISION IS NOT JUST ABOUT ONE GAME’

“People on social media always think we wake up and fire coaches, they’re comparing us to my friend in Gqeberha Chippa [Mpengesi], I mean we’ve only fired or released two coaches since we came into top flight so I don’t even know how they get there,” Mogashoa added.

“So for us to get to that decision is not just about one game we look at the previous games and then look at what is likely to happen in the next game and the decision is taken.

“We didn’t want to wait until we get to next game where we would have problems because then would already be standing on the coach’s doorstep trying to harm him and we don’t things like that, no unfortunately not.”