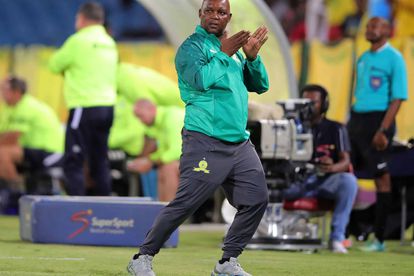 Teacher faces pupil as Pitso Mosimane’s Mamelodi Sundowns square off with Kaitano Tembo’s SuperSport United in the Tshwane derby. For both sides, the clash at the Lucas Moripe Stadium is a vital acid test.

Mosimane coached Tembo during his time as a player at Matsatsantsa a Pitori, but there is no room for sentiment on Sunday. Neither team can afford to settle for anything less than a victory.

Sundowns’ title hopes hang in the balance as they trail league leaders Kaizer Chiefs by nine points following a 1-0 defeat to Orlando Pirates.

SuperSport United are a point behind Sundowns having played one more game, which means league success is unlikely for them — even if not impossible.

CAF Champions League qualification is still very much an achievable goal and SuperSport United can take a major step towards this with victory on Sunday.

They will look to take advantage of a wounded Sundowns side coming off the back of a disappointing performance against Pirates.

“Ja difficult, on the results only, not the game. We came here and played as usual. Not happy because it’s my first defeat here in seven years, I thought I’d keep the results, they’ve been good,” Mosimane told SuperSport TV post-match.

Sundowns now turn their attention to Matsatsantsa, who beat them in the MTN8 semi-finals after losing the opening league game of the season to the Brazilians. This essentially is a Tshwane tiebreaker of sorts and promises to be an exciting one.

Prediction: There is little to separate the two sides on paper and our assessment is that a draw is a likely result.

The bookmakers have Sundowns down as favourites with a 44% chance of victory and have given SuperSport United a 33% chance of success.

Matsatsantsa tend to perform well in difficult games and have a 48% win record at these odds compared to 41% for Sundowns.