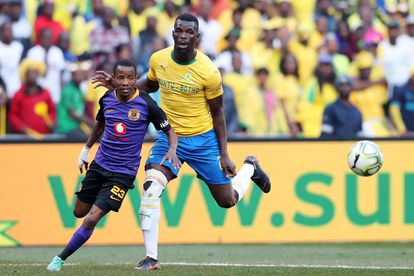 SuperSport United have secured the services of another Mamelodi Sundowns player for the remainder of the season.

Bangaly Soumahoro did enough during his time with SuperSport United to convince the technical team that he’s deserving of a deal.

However, Matsatsantsa could only afford to sign him on loan at this point, but Soumahoro would be pleased that he may now get some game time.

After weeks of training with SuperSport United, the club took to their social media platforms to announce Soumahoro as their player on Tuesday.

He becomes the second player to join them from Sundowns after Sifiso Ngobeni was announced on the same day.

What is unclear at this stage is whether or not the duo are part of the deal that saw Sundowns sign Teboho Mokoena from SuperSport United.

However, looking from outside, it appears as if Sundowns were sweetening the Mokoena deal by sending Soumahoro to train with SuperSport United in late 2021.

READ | MZANSI FALLS IN LOVE WITH ITUMELENG KHUNE AGAIN – FIND OUT WHY!

Soumahoro has been on the books of Sundowns since 2015 but he could only manage 70 official appearances.