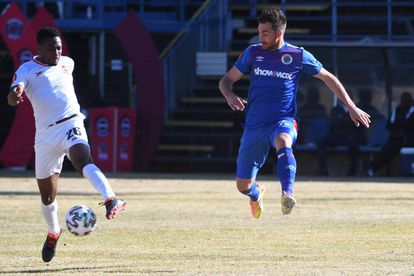 Supersport United collected all three points in their PSL fixture against Polokwane City at Bidvest Stadium on Wednesday afternoon.

Matsatsansa scored a goal in either half to walk off 2-0 victors, piling on more misery on the relegation-threatened Limpopo outfit, who came into the fixture languishing in last place in the PSL standings.

Looking to fight their way off the red zone, City were quick off the blocks as they immediately surged to the hosts’ half, prompting a clearance from Clayton Daniels.

However, the early breakthrough came from the other end when miscommunication at the back saw Bradley Grobler release Gamphani Lungu, who slotted in calmly with just eight minutes on the clock.

The Zambian forward could have doubled the lead just ten minutes later when he received a cross from Guily Manziba, but his header went wide.

The were chances for Grobler and Teboho Mokoena before the first cooling break, with Manziba also getting close five minutes after the recess, but there was no change to the scoreline.

City looked to finish the half how they began by putting United under sustained pressure, with the best chance falling to captain Jabu Maluleke, who blasted his shot wide just three minutes from the break.

The hosts had another chance at the stroke of halftime, but George Chigova – playing in place of Cyril Chibwe – denied Manziba his first United goal.

The second half began with another chance for the men in blue, which ended in disappointment as Aubrey Modiba missed a sitter right in front of goal in the 51st minute.

They continued to dominate, forcing another save from Chigova, who kept out a goal-bound header from Grobler on the hour mark, before Lungu’s follow-up from the ricochet went wide.

City were then awarded a free-kick right on the edge of Maluleka’s range, but it proved to be too far for the veteran midfielder, whose effort was easily dealt with by goalkeeper Ronwen Williams, who leads the list of clean sheets in the PSL this season.

The Bafana shot-stopper was again called upon in the 75th minute, when Salulani Phiri tried his luck from outside the box, and dived low to push the ball out for a corner.

Two minutes into injury time, second-half substitute Kudakwashe Mahachi delivered a superb cross to Grobler, who made no mistake in deflecting the ball into the net.

Grobler was named man of the match, after having a hand in both goals scored on the day.

The result means that United leapfrog Orlando Pirates to take up third-place in the PSL log, while City sink deeper into the mire.

How they lined up