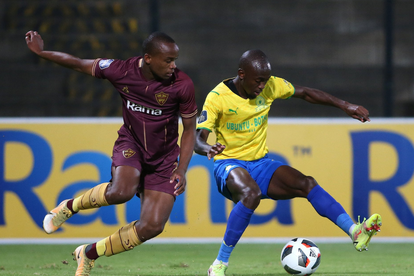 What’s more beautiful than a kid’s stellar debut? Peter Shalulile, Themba Zwane, and Thabiso Kutumela were outplayed by Stellenbosch FC’s 19-year-old debutant Athenkosi Mcaba, this is according to the club’s report.

As reported by The South African, the young defender realised his top division debut dream last weekend against the mighty Mamelodi Sundowns. The starting lineup news suggested his coach Steve Barker was playing with fire…

The youngster started in a back-three alongside Robyn Johannes and Zitha Kwinika at the Danie Craven Stadium, where the visiting log-leaders were held to a 1-1 draw.

The Tsakane-born former Bidvest Wits academy product’s performance included nine out of 10 successful challenges, three out of four headers, 100% successful tackles, and no less than 10 interceptions!

ALSO READ: DStv Premiership – ALL the weekend’s RESULTS after Kaizer Chiefs’ NO SHOW

The youngster’s performance debut against Shalulile, Zwane, and Kutumela was duly applauded by his brave coach Barker after the game.

“I think our principle with the way we look at things doesn’t change much, but you know to give Athenkosi (Mcaba) a debut for me was really superb. A lot of good things for him to come,” Barker told SuperSport after the game.

Up next for the unbeaten Kabo Yellow is a home battle against one of the league’s most unpredictable sides, Royal AM on Wednesday in the capital. Victory for Mzansi’s champions will stretch a superb 11 point lead at the summit.