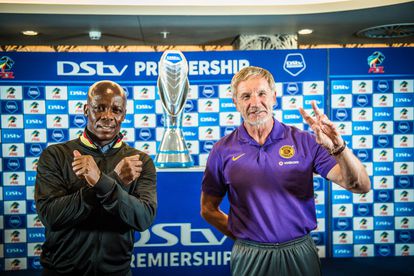 Stuart Baxter and Mandla Ncikazi are set to extend a BIZARRE 11-year record in the Soweto derby, the longest of it’s kind in the PSL-era.

READ | SOWETO DERBY: STUART BAXTER IJURED! WILL HE BE ON THE SIDELINES FOR RECORD 100TH PSL GAME?

According to KickOff’s website, Baxter and Ncikazi become the latest new combination of coaches to take charge, the 11th new pair in 11 years!

That means that there has been a different pair of coaches in charge of every single match between Kaizer Chiefs and Orlando Pirates for 11 years in a row – last season was Gavin Hunt (Chiefs) and Josef Zinnbauer (Pirates).

The last time that the same coaches appeared for both derbies in back-to-back seasons was back in 2009/10 and 2010/11 when Vladimir Vermozovic and Rudi Krol were in charge at Chiefs and Pirates, respectively. This is also the only time this happened since the PSL-era started in 1996.

The previous year Ernst Middendorp took charge at Naturena while Rulani Mokwena was shouting out his lungs in the first league match before being replaced by Zinnbauer.

In the 2018/19 season, Chiefs had Giovanni Solinas for the first-round match before Middendorp returned while Milutin Sredojevic was in charge of Pirates.

The previous season (2017/18) saw Steve Komphela at Amakhosi against Micho Sredojevic at Bucs in both league games. For the 2016/17 campaign, Komphela went up against Muhsin Ertugral before facing Kjell Jonevret later that year.

Komphela faced Eric Tinkler in the 2015/16 season. Baxter’s first spell in charge at Chiefs lasted three years, during this time he came up against Roger de Sa, Vermozovic and Tinkler at Pirates.

In the 2011/12 season it was Vermozovic at Chiefs with Julio Leal and then Augusto Palacios at the helm at the Buccaneers.

This is truly astonishing! This record shows emphasizing the instability of coaching during the PSL-era.

Both coaches will be setting PSL records.

Stuart Baxter will be taking charge of his 100th PSL game while Ncikazi and Fadlu Davids will be in charge of their first-ever Soweto derby in the PSL.