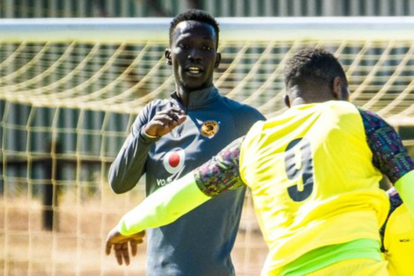 Since last season ended, most of the transfer talk has revolved around Chiefs’ search for another attacking player. During the last window, Chiefs have only signed forward Ashley Du Preez after releasing the likes of Samir Nurkovic, Lazalous Kambole, Bernard Parker and Leonardo Castro, while the club was believed to be looking at Wayde Lekay, Bonfils-Caleb Bimenyimana and Musa Kamara during pre-season.

Lekay and Kamara are no longer part of Chiefs’ planning as they are looking for an out-and-out striker, although according to some reports, the club management had been quite impressed by Bimenyimana.

There have been some conflicting rumours over whether Bimenyimana was the type of player Amakhosi are really looking for, though, and it was recently revealed that no deal had seemingly materialised.

The 24-year-old also opened up about his time at the club, and hit out at Chiefs in a shock series of allegations.

“I cannot keep waiting for Chiefs forever, so I have to move on,” he told KickOff.com. “The next team that I will play for will not be from Africa. I thought everything went well while I was training with them, but I don’t know what happened in the end because I was meant to stay there for two weeks but they kept me for another week.

“During the three weeks that I spent with them, I blocked out other options because I was sure that I will get a deal there. Now, it feels like being with them was just a waste of time. I wish them all the best in the new season,” added Bimenyimana.

Yet, if reports are to be believed, Bimenyimana may have spoken too soon. According to SABC Sport, the Burundian striker is in fact heading back to South Africa to conclude a deal with Amakhosi.

The report states that the powerful forward has in fact done enough to impress the Chiefs bosses, and that his imminent arrival will complete the club’s attack.

Chiefs had previously been non-committal when talking about Bimenyimana

“Look, he (Bimenyimana) has done well, to be quite honest,” Arthur Zwane said last month, according to FAR Post. “We are still undecided as to whether we are going to bring him on or if we are still looking because we are looking for a certain type of striker with the way we want to play and the way we are going to play in future.

“We can’t just have someone who will sit inside the box. Yes, he is very mobile, and he is comfortable on the ball, but we are looking at other qualities as well.”

Last month it was also reported that striker Darren Smith, who has spent time with clubs such as SuperSport United, HIK Honka and Ekenas IF, had headed to Chiefs for an assessment period. However, a deal also failed to materialise on that front.