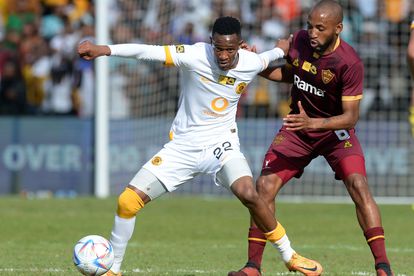 Stellenbosch FC midfielder Sibongiseni Mthethwa has been in impressive form and could be the latest name on the Glamour Boys shopping list.

Mthethwa has been the engine of the Stellenbosch FC midfield this term featuring in every game for the club in the 2022/23 season so far.

Stellies player looking at move to Gauteng or Durban

There has been reported interest in Mthethwa from SuperSport United and Royal AM.

Soccer Laduma report: “Recent reports have linked Mthethwa with a potential move to SuperSport United, while the Siya crew has since gathered that Royal AM are also the admirers of the midfield strongman.

“Sibongiseni Mthethwa has attracted interest from Royal AM and is being monitored. He is doing well at the moment, and it is no surprise that clubs are keeping an eye on him,” the source is quoted as saying.

Ashley du Preez has been highly influential for Kaizer Chiefs this season adding another dimension when he plays.

For this reason Zwane has had to use him sparingly after an injury.

“We welcomed back Du Preez after missing about three games, and you could see he was a bit flat because of fitness. We were also worried, as much as we played him, but we were also cautious because we didn’t want to break him again or see him get another injury, so we tried to manage him,” Zwane said.

“We knew that he was not going to finish the game but what was key was for him to score the goal because that will boost his confidence, and in the next game, he should be better than this in terms of performance and he might be able to score even more goals, so we are happy to have him back,” the coach added.