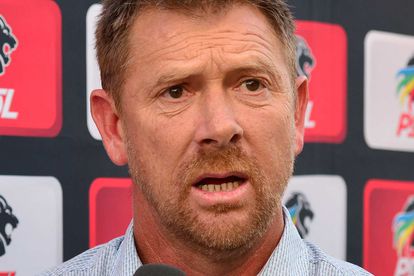 Cape Town City coach Eric Tinkler says the club has lodged an official complaint with the PSL regarding the order to replay their Kaizer Chiefs match. Photo: Kabelo Leputu/ BackpagePix

Cape Town City coach Eric Tinkler says the club has lodged an official complaint with the PSL regarding the order to replay their Kaizer Chiefs match. Photo: Kabelo Leputu/ BackpagePix

Premiership new boys Stellenbosch are sensing a real shot at their first three points in the big time as they play host to wobbling Maritzburg United on Sunday.

The promoted Winelands side have a point to show from their opening two encounters at the top table of South African soccer.

They were able to raise a glass on sealing their maiden point on the road at Chippa United on the opening Saturday at the Nelson Mandela Bay Stadium in Port Elizabeth.

But Stellies were edged out by Cape derby rivals Cape Town City at Athlone Stadium the following weekend.

They will return to the Cape Town venue this Sunday as the ‘home’ team, thanks to the ongoing search for a venue of their own that meets PSL standards.

Boss Steve Barker is not panicking at this early stage and has even dismissed rumours of a swoop for ex-Kaizer Chiefs defender Mario Booysen.

The coach said: “No, we are not talking to Mario, there are no negotiations at all. There’s nothing on that story.

“I’m not too sure where it comes from, but we’re full in that department.”

He will have to hope the supporters’ bus to Cape Town is similarly well stocked this weekend.

Maritzburg have strife of their own at the other end of the pitch, with just a solitary goal to show for their first two outings of 2019/20.

Kwanda Mngonyama’s goal was cancelled out at the death as Highlands Park snatched a draw at the Harry Gwala Stadium earlier this month.

It did at least put a first point on the board, following defeat at Golden Arrows on the opening weekend of the campaign.

Their trip down to the Cape sees a side that strengthened considerably during the off-season needing to step it up quickly to avoid relegation fears creeping in early on.

Prediction: Stellenbosch FC to get their first win of the season.