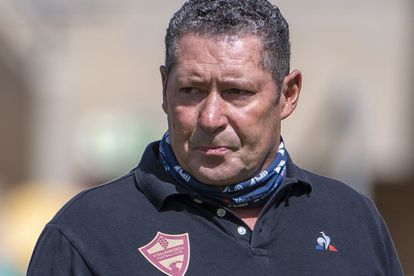 Stellenbosch FC coach Steve Barker has paid tribute to the club’s departing stars after confirming the exits of at least SEVEN players. Photo AM

Stellenbosch FC coach Steve Barker has paid tribute to the club’s departing stars after confirming the exits of at least SEVEN players. Photo AM

Stellenbosch FC coach Steve Barker has paid tribute to the club’s departing stars after confirming the exits of at least SEVEN players.

Stellies ended the 2021/22 DStv Premiership season on a high on Saturday with a 1-0 win over Cape Town City FC at the Danie Craven Stadium.

Barker’s side claimed all three points courtesy of a 87th-minute winner from veteran midfielder Granwald Scott, who incredibly scored his first goal for the Winelands side in his final appearance for the club.

The 34-year-old’s contract is set to expire at the end of the campaign and he is one of at least seven players who will be leaving, with the club confirming the departures of Robyn Johannes, Waseem Isaacs, Stanley Dimgba, Nathan Sinkala, Sibusiso Mthethwa and Zitha Kwinika.

In addition, there has been widespread speculation that Ashley du Preez will also be departing.

“Scotty doesn’t score too many goals, so it was a fitting farewell for him,” Stellenbosch coach Barker said after the match.

“We wanted to give the guys who are leaving a bit of a swansong and a bit of a run-out.

“I’m a bit heartsore and sad because of the decisions we’ve made [to let them leave] but the players can walk with their heads held high because they’ve left the club in a better place.

“Robyn Johannes, Granwald Scott, Waseem Isaacs, Stanley Dimgba, Nathan Sinkala, Sibusiso Mthethwa and Zitha Kwinika, who I think everyone is aware is going to Kaizer Chiefs, are the players that are leaving.

“I cannot speak highly enough of what they have done for this club. So as much as we are happy [with the result] we are sad at the same time. They all can continue playing and one or two of them have already got offers around.

“They may come back later as coaches or part of the football club, but sometimes you have to make those decisions and hope you’ve made the right ones.”

Barker also confirmed that Stellenbosch would be active in the upcoming transfer market while also looking to promote younger stars from the club’s reserve team, who were recently crowned 2021/22 DStv Diski Challenge champions.

“Let’s hope we can have a good transfer window and look to bring in the right players who will continue to take us forward. We probably have to start a bit of a new cycle. A couple of our young players will be rewarded with first-team call-ups, and we are active in the market to continue strengthening the squad.”

Despite a win over Cape Town City in their final match of the season, Stellenbosch are likely to fall short of a place in Africa next season.

Stellenbosch FC are third in the standings

They currently lie in third place – and occupy a CAF Confederation Cup spot – but fifth-placed Royal AM only need one point from their final two matches to pip them to the all-important third place.

In addition, should Orlando Pirates win their remaining three matches (or pick up two wins and a draw and boost their goal differential by six) they too would finish ahead of Stellenbosch.