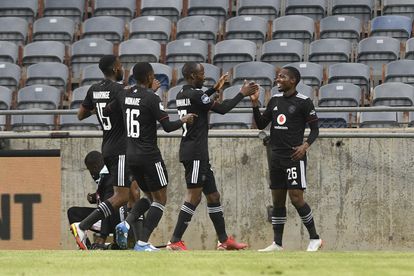 One of the country’s iconic rivalries takes centre stage on Tuesday when Orlando Pirates visit the Dobsonville Stadium to take on Swallows. Photo: Sydney Mahlangu/BackpagePix

One of the country’s iconic rivalries takes centre stage on Tuesday when Orlando Pirates visit the Dobsonville Stadium to take on Swallows. Photo: Sydney Mahlangu/BackpagePix

Orlando Pirates did enough to snatch all three points with a 2-0 win over TS Galaxy at the Orlando Stadium on Saturday.

Pirates found their scoring touch either side of half time to put away a stubborn opponent.

Bandile Shandu gave Orlando Pirates the lead in the first half when he arrived late to fire a shot at the TS Galaxy goal. He was denied by the keeper initially but he fired in the rebound from a nearly impossible angle.

Collins Makgaka has been enjoying a terrific run of form since being given his chance to impress with injury sidelining Vincent Pule.

Makgaka provided the assist for Deon Hotto’s goal in midweek and the Namibia star repaid the favour, turning down an opportunity to shoot to lay one on for his teammate.

It was nothing more than a tap-in but the goal was just reward for a great performance from the attacking midfielder.

Orlando Pirates would withdraw both Hotto and Fortune Makaringe after that goal with Ntsako Makhubela and Bongani Sam coming on for the last 15 minutes of the game.

Masilakhe Phohlongo would go close in the dying embers, however, his shot flew wide and Galaxy sunk to defeat.

Orlando Pirates, meanwhile jumped to second on the log with their win, although Sunday’s matches might see them slip back before the weekend is in the past.