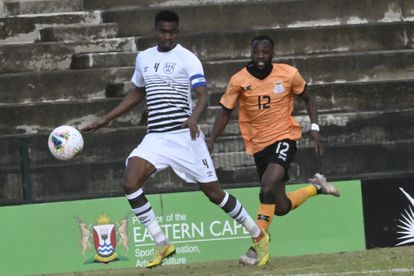 Mosha Gaolaolwe of Botswana and Justin Shonga of Zambia during the 2021 COSAFA Cup match between Zambia and Botswana at Wolfson Stadium in Port Elizabeth, on 13 July 2021 ©Deryck Foster/BackpagePix

Mosha Gaolaolwe of Botswana and Justin Shonga of Zambia during the 2021 COSAFA Cup match between Zambia and Botswana at Wolfson Stadium in Port Elizabeth, on 13 July 2021 ©Deryck Foster/BackpagePix

The Zambian was a free agent, having secured his release from Egyptian Premier League outfit Ismailly last month.

According to a report from Goal.com, A source at Sekhukhune has said that Shonga is now a Babina Noko player.

“He trained with us yesterday (Friday) when we returned from the festive break and he confirmed that he had signed,” the source said.

“He was also present when we did this morning’s (Saturday) workout. Yes, he is our first signing of this mid-season transfer window.”

Shonga won’t be able to rest on his laurels at Sekhkhune with competition for places in the attacking line fierce.

Ohizu has been linked with a move to Shonga’s former club with Kaizer Chiefs and Mamelodi Sundowns also said to be interested after his stellar start to his season.

The option to extend the contract

According to inside sources, Shonga has signed a six-month contract with Sekhkhune retaining the option to extend the deal for two years.

“Justin Shonga has agreed on a deal to join Sekhukhune United for the second round of the season. Both parties are happy and have agreed on a six-month deal with an option to extend for two years.

The parties are just waiting on an international clearance and Shonga will officially be a Sekhukhune United player when the season resumes,” a source told Soccer Laduma.

Shonga was a prominent member of the Orlando Pirates teams that challenged for the title under Milutin Sredojevic, but since leaving the club hasn’t been able to set roots down.