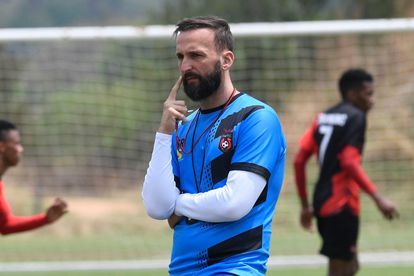 The 24-year-old shot-stopper, who survived an horrific stabbing during a car hijacking in Soweto in February this year, had a tough day at the office against Orlando Pirates last weekend as the Rockets lost 2-0, in part due to mistakes from Buthelezi.

However, Ramovic insisted it would be unfair to judge his ‘keeper on one match, especially considering how good he has been so far this season.

ALSO READ | MAMELODI SUNDOWNS: DID ERASMUS HIT BACK AT RHULANI WITH CRYPTIC TEXT?

“I think with the two goals we conceded we were really unlucky because I think [the first] was a shot that would have probably gone wide, but the ball deflected on Given and went in,” Ramovic said, according to TimesLIVE.

“You can’t do anything against these kinds of goals. And the second goal was a really unlucky goal and I will not say anything against Melusi because he has played since January and he has been unbelievably good.

“Everyone makes some small mistakes sometimes. Yes he conceded an unlikely goal but for me he is one of the best goalkeepers right now in SA.

“I think that he deserves a call-up for Bafana Bafana because he has played really well. And anybody who judges him now after an unlucky game, I would say they don’t understand anything about goalkeeping.”

ALSO READ | ARE KAIZER CHIEFS THEIR OWN WORST ENEMY IN THE TRANSFER MARKET?

It remains to be seen whether Bafana Bafana coach Hugo Broos will reward Buthelezi with a call-up.

Perhaps most worrying, however, is the fact they have only managed three goals in those seven matches which is the fewest in the league to date.

TS Galaxy will next be in action away against high-flying newcomers Richards Bay on Sunday, 18 September at 17:30.