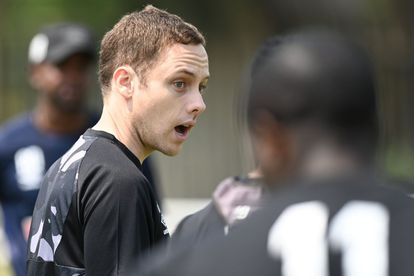 AmaZulu head coach Romain Folz has expressed his confidence in his team as they prepare to meet Orlando Pirates in the MTN8 final.

‘Fohloza’ celebrated as someone who had just won the World Cup after the referee blew the final whistle as his side drew 0-0 with Kaizer Chiefs, winning their semi-final tie on the away goals rule after they scored in the first leg of a 1-1 stalemate.

However, the Frenchman still hasn’t tasted a victory on South African soil as he has now played eight matches, losing one and drawing seven including five games in his short stint with Marumo Gallants.

Folz admitted that the final would be a tough game but was clear that he sees Orlando Pirates like any other opponents.

‘JUST BRING WHOEVER YOU WANT’ – FOLZ

“But at the end of the day, if you want me to tell you that we think they are better than us or something like that, no, we’re absolutely not scared of them or any team that you put in front of us.

The KwaZulu-Natal outfit is next in action against Folz’s former employers Marumo Gallants on Wednesday, 26 October.