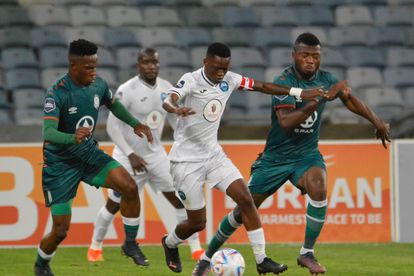 Richards Bay FC recorded a 1-0 win over AmaZulu in the two teams’ first ever top-flight meeting at Moses Mabhida Stadium on Wednesday.

Sakhile Hlongwa came off the bench to score a late stoppage time goal to hand Richards Bay all three points away from home.

However, the goal was credited as an own to AmaZulu Veli Mothwa as the ball bounced off the crossbar and on his way back before hitting the back of the net.

The result saw Richards Bay move to within two points of leaders Mamelodi Sundowns who are on 19 points after nine games.

This encounter also saw the return of Luvuyo Memela to Moses Mabhida Stadium for the first time since leaving AmaZulu at the end of last season.

As expected, the game started with high-tempo as both teams wanted to grab an early lead but no clear goalscoring chances were created.

The only major thing that happened was an early jnjury to Gumede who had to be substituted after 21 minutes.

The ssecond half was marred by thunder and lightning as it started raining in Durban in the final 15 minutes.

However, the game resumed after being temporarily suspended, and Richards Bay came out guns blazing and they were rewarded with a goal.

Hlongwa fired from the edge of the box after being given acres of space by AmaZulu defenders, and his attempt hit the crossbar and came off Mothwa’s back and kissed the net.

ALSO READ | BILLIAT, TAU AND ONYANGO IN CAFCL TEAM OF THE DECADE

And that’s how it ended in Durban as the Natal Rich Boyz walked with maximum points and KZN bragging rights.