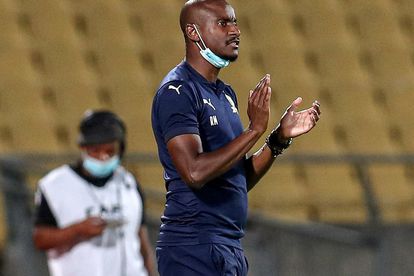 Mamelodi Sundowns co-coach Rhulani Mokwena believes that thanks to Sibusiso Vilakazi, TS Galaxy had “intel on them”.

Masandawana succumbed to a shock 1-0 home defeat to a spirited TS Galaxy side in their second match of 2022/23 DStv Premiership on Wednesday.

Mokwena said Vilakazi trained with them almost the whole pre-season and knew their weaknesses.

“You could see that having Villa (Vilakazi), a very smart and intelligent person, train with us the entire pre-season played a little bit to their advantage. He has so much intel and they knew 150% the weaknesses of our team,” said Rhulani Mokwena as per TimesLIVE.

“But be that as it may, we could have played better. We can play better, we know we had a couple of players not on regular momentum and intensity but that’s preparation and preparation is us the coaches.

“If the team is not well prepared in regards to the duels and physicality then, we have to look at ourselves and check how we prepared the team and hopefully we can prepare better for the next one.”

In the second half, Sundowns made several substitutions seeking a comeback, however the Rockets’ defence stood firm.

“Sometimes these things work and sometimes they don’t work. It will be nice to sit here and sound like a genius but the reality is that the score is 1-0. We tried to chase the game where we were playing against a spirited side who were looking for counter attacks and the box was a little bit crowded,” he added.

“Then you need players who have the ability to manipulate space in tight and congested areas and Lesedi Kapinga and Sipho Mbule are one of those.

“You also need to balance it, because it is not only about receiving between the lines but it is also bringing the defensive line a little bit deeper and Abubeker Nasir Ahmed and Gaston Sirino have very good moments behind the defensive line.

“It is very difficult to play TS Galaxy with 11 against 11 and the score is 0-0, you have this huge intel on the other side plus you are 1-0 down, it become very difficult.

“Players in the second half gave a very good account of themselves, they pushed to the extremes. Aubrey Modiba was very good, Brian Onyango and Rushine de Reuck took a lot of risks and they pushed the line a bit higher.

“We tried something new today, but they are a very complicated side and a well-coached team,” Rhulani Mokwena concluded

Sundowns will host Kaizer Chiefs on Saturday in what promises to be a blockbuster clash. Both sides have suffered defeats in their first two league games and won’t want to lose again.

Sandile Zungu responds to rumours of ‘under pressure’ Brandon Truter

‘No longer my responsibility’: Did Cassper shade Nadia Nakai?

Job hunting? Here are the best websites to look for work