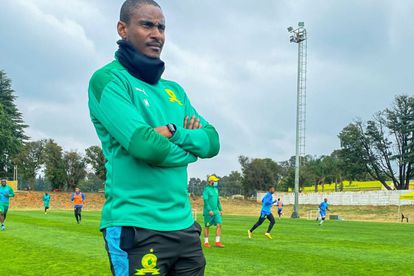 Mamelodi Sundowns co-coach Rhulani Mokwena was critical of his side after their shock home 1-0 loss to TS Galaxy in the DStv Premiership on Wednesday.

Masandawana came in as strong favourites to win the match following their strong start to the season away against Cape Town City on Friday.

Mokwena suggested the performance of his side wasn’t good and they were not hungry enough.

RHULANI MOKWENA CRITICAL OF HIS SIDE

“What’s there to say?” he asked in an interview with SuperSport after the game.

“70% ball possession, 18 chances, four big chances and then they get two chances, the one that they took on transition and the one for ‘Vila’ one on one with Ronwen.

“We move on, it’s going to be a very long season.”

Asked if Mamelodi Sundowns needed some time to find rhythm, Mokwena said they are running out of time because they have to start winning now.

“There’s no time in football though, you’ve got to win matches. We’re in the spot of winning matches, as coaches our job is to win matches,” he added.

“The performance today was not good. We had too many players that were struggling with the touch, intensity of the game.

Mokwena went on to explain the reasons behind the substitutions they made in the second half. Bafana Ba Style brought on the newly signed Abubeker Nasir, Sipho Mbule, Andile Jali, Gaston Sirino and Lesedi Kapinga.

“Today it was one of those games where you could inject a little bit more. And then you try to bring Sipho, Lesedi, Nasir because you think they have something around the box. Because that’s where the goals are scored,” he explained