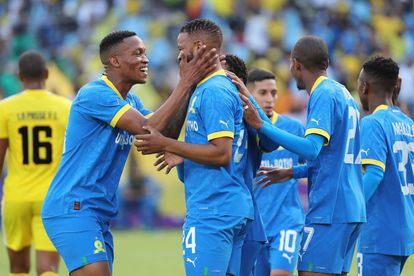 Mamelodi Sundowns coach Rhulani Mokwena has named FOUR players that had to stay behind and work on their physical condition over the past few weeks.

Almost every PSL team gave their players a break following the completion of the first half of the season which is extended due to the ongoing FIFA World Cup.

However, at least four Sundowns stars didn’t have that break as they needed to be in top shape before the resumption of the season later this month.

According to Mokwena, Bongani Zungu, Marcelo Allende, Sipho Mbule and Gift Motupa are the four players who worked on their physical condition.

Zungu, Mbule and Motupa have appeared to have gained weight this season which has made it difficult for them to feature regularly for Sundowns.

And a lot of factors can be attributed to that but perhaps the main one would be the fact that they were not active months leading up to the current season.

Zungu only joined Sundowns after the start of the season following his departure from Amiens SC and, therefore, missed the pre-season.

Mbule, on the other hand, was frozen out for months at SuperSport United after being accused of disrespect by his former bosses.

ZUNGU AMONG THE FOUR SUNDOWNS PLAYERS THAT NEEDED PHYSICAL CONDITIONING

“They stayed behind and worked a little bit harder on their physical condition. We’ve got some very good players and some very honest football players, and players showed extreme professionalism.”

“We really appreciate it in the sense that there was no whining and complaining but only professional spirit,” he added.