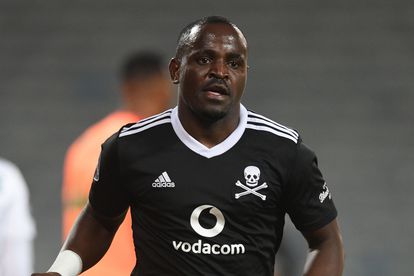 Royal AM striker Victor Letsoalo and Orlando Pirates forward Gabadinho Mhango’s next moves are said to be dependent on each other.

According to the latest reports, the futures of both Letsoalo and Mhango could directly impact each other at Royal AM and Pirates respectively.

Contrasting seasons for Letsoalo and Mhango

Both strikers have had contrasting seasons on the field of play, but their off-field situations seem to mirror each other.  While Letsoalo has had a terrific season so far, finding himself with 15 league goals with one game to spare, Mhango has hardly featured for Pirates at all this season, due to a combination of injuries and disciplinary issues. One thing that the two have had off the field is the speculation surrounding their respective futures.

It has become no secret that Letsoalo is a wanted man in Soweto, with both the black and white, as well as the gold and black sides of the divide, unified in their interest of the Bafana Bafana international. But, even though they have confirmed approaches from Chiefs, Royal AM have remained resolute in their stance on the player.  Furthermore, the marksman has seen his contract extension triggered for another year. Mhango has seen a similar situation at Pirates, where his year-option extensions was also taken.

Before these options were triggered, it was rumoured that Pirates were looking to swap Mhango for Letsoalo in the January transfer window, but Mhango’s form at the Africa Cup of Nations in Cameroon might of put an end to that. But the Malawian’s fortunes did not change like they were expected to upon his return. It has now been reported that the Buccaneers are open to cashing in on him during this close season. That has re-alerted Royal AM according to a source speaking to The Citizen, who even suggests that the initially proposed swap deal could just be back on.

“The thing is this transfer is complicated. It could end up with a straight swap – with Mhango going to Royal AM and Victor (Letsoalo) going to Pirates, But there are other clubs who have made enquiries about Letsoalo and have made their lust over him quite obvious. We will see how it pans out, but Royal AM will release Victor only after they are assured of getting Mhango as a replacement.” Said the source.

It now seems as if Pirates have moved on from Letsoalo, with the latest reports claiming they’re close to signing Chippa United striker Bienvenu Eva Nga. It also sounds like Chiefs have conceded the fight due to the financial demands of Royal AM so it remains to be seen if he will move at all. Mhango on the other hand is likely to push for a transfer and many would back the Durban-based outfit to afford the player without a swap deal.