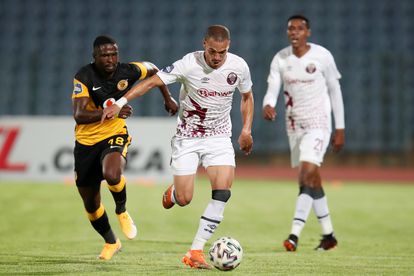 Ruzaigh Gamildien of Swallows challenged by Kgotso Moleko of Kaizer Chiefs during the DStv Premiership 2020/21 match between Swallows and Kaizer Chiefs at the Dobsonville Stadium, Soweto on the 24 November 2020 ©Muzi Ntombela/BackpagePix

Ruzaigh Gamildien of Swallows challenged by Kgotso Moleko of Kaizer Chiefs during the DStv Premiership 2020/21 match between Swallows and Kaizer Chiefs at the Dobsonville Stadium, Soweto on the 24 November 2020 ©Muzi Ntombela/BackpagePix

In the latest wrap of PSL transfer rumours we look at the area Kaizer Chiefs have set as their priority for recruitment.

Gavin Hunt has been left bemused by Kaizer Chiefs struggling strikeforce and has identified the need for the club to strengthen by signing attacking players.

Chiefs are believed to be close to signing in-form Swallows striker Ruzaigh Gamildien and have also been linked with the 2020/21 Golden Boot leader Bradley Grobler, who is reportedly keen to work with Hunt.

Hunt bemoaned Kaizer Chiefs striking options after his side failed to make the most of their chances in their 2-1 defeat to Cape Town City on Wednesday.

“I think we have had a lot of opportunities in that position. We should have someone in double figures, that’s for sure. But it has not been, obviously because of unavailability and a lot of missed games and due to a lot of other reasons and there’s one main factor. But that’s out of my hands, but that’s not the be and end all. But certainly we have missed a lot of opportunities, but we have also let in a lot of goals this season. In these type of games you can defend better and still win these type of games,” Hunt told the media after the game.

TS Galaxy defender Bevan Fransman will learn if he will remain at the club next season in the coming weeks according to a report from Soccer Laduma.

Fransman was on the books of Highlands Park when TS Galax bought their PSL franchise and the Mpumalanga club handed him a one-year deal.

TS Galaxy chairman Tim Sukazi told the publication that he would take the advice of the coaching staff before deciding the futures of players whose contracts are expiring.

“We are a new club, so our contracts are still new. I will hear from the technical team to brief me in due course,” Sukazi said.

Baxter set for return to SA

Former Kaizer Chiefs and Bafana Bafana manager Stuart Baxter is believed to have been tapped up for a role in the PSL.

Baxter saw his contract with Indian Super League club Odisha torn up after he made a reference to rape in a post-match interview.

The verbal gaffe has seemingly not put off clubs in South Africa with the coach’s agent confirming that he has recieved offers.

“We’ve had several clubs ask about Stuart and his availability and he is obviously keen to get back and work again.” the former Kaizer Chiefs head coach’s agent Steve Kapelushnick said.

“I can confirm that he’s already received two offers from abroad and I have been contacted by two local clubs to inquire about his availability for the new season.

“I think it has to be a project that gives him that security and time to do what he is good at: building, competing and winning.”