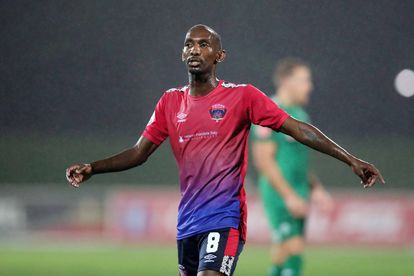 Thabo Rakhale of Chippa United during the Absa Premiership 2019/20 match between AmaZulu and Chippa United at the Princess Magogo Stadium, KwaMashu on the 09 November 2019 ©Muzi Ntombela/BackpagePix

Thabo Rakhale of Chippa United during the Absa Premiership 2019/20 match between AmaZulu and Chippa United at the Princess Magogo Stadium, KwaMashu on the 09 November 2019 ©Muzi Ntombela/BackpagePix

The 30-year-old has been without a club since Chippa United released him in July.

He becomes the latest signing announced by the Limpopo-based outfit, joining the likes of Mogakolodi Ngele and Justin Shonga at the club.

We can confirm that we have signed Thabo Rakhale

Rakhale was previously linked with several top clubs, including Kaizer Chiefs, who are unable to sign any new players due to a transfer ban imposed on them by Fifa.

He will provide a much-needed injection of experience to his new side, having played over 150 senior matches across competitions.

The bulk of his appearances came during his four-year spell at Orlando Pirates, where he played 86 times, netting four goals.

At Chippa, he had slightly better returns in front of goal, scoring five times and providing ten assists in 68 games.

After months in the wilderness, the player’s agent confirmed that he had found a new club.

“Rakhale is 99% done with joining his new team. But I can’t reveal much because they said when the time is right, they want to make their announcement,” the player’s agent, Mandla Mthembu told Sowetan earlier in the week.

“I don’t want to ruin things for them because of their reasons they told me. My comment, I will say, is 99% done. That’s all I can say. Rakhale will be unveiled by his new team whenever they are ready. Let me put it that way.”

TTM have recorded two draws and a defeat in their first three games in the top flight, and currently occupy 13th place in the standings.

Fire in the eyes: Kaizer Chiefs players at training – Images