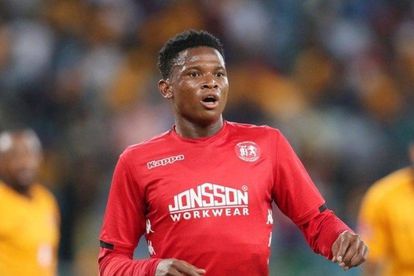 A former PSL star has tragically lost his life in a car accident he was involved in on Tuesday, reports Botswana publication Mmegi.

According to the publication, Lesenya Ramoraka passed away after the tyre of the car he was driving in burst on his way from Chadibe.

ALSO READ | BILLIAT, TAU AND ONYANGO IN CAFCL TEAM OF THE DECADE

Born in Chadibe, Botswana, the 28-year-old had went to see his family and friends for the national Independence Day holiday.

Ramoraka first arrived in South Africa at the start of 2018-19 season to sign for Highlands Park but he would move to TS Galaxy for the 2020-21 campaign.

And that was because TS Galaxy had bought Highlands Park’s PSL status but he didn’t last there due to a long-term injury.

Ramoraka would then return to Botswana to sign for former club Orapa United FC; the club he was playing for when Highlands Park recruited him.

He left South Africa’s topflight having played 35 games, scoring a single goal and providing an assist despite being a left-back.

And that goal came in Highlands Park’s 3-2 loss to Kaizer Chiefs on 2 March 2019 at the FNB Stadium.

Ramoraka was also a full Botswana international with seven caps to his name, including five appearances in the Africa Cup of Nations (AFCON) qualifiers.

The South African website would like to send its heartfelt condolences to the Ramoraka family, friends, and everyone who was close to him.