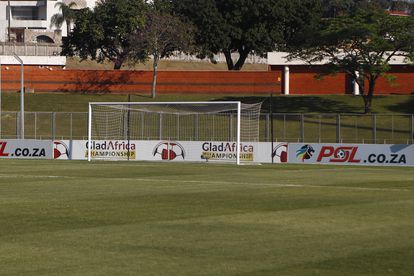 The Premier Soccer League (PSL) are reportedly set to throw the book at Royal AM after they no-showed a promotion/relegation playoff.

On Tuesday 22 June, Royal AM players made their way to the Chatsworth Stadium, seemingly set to honour the fixture, however the KwaZulu-Natal side soon packed up and left.

PSL set to throw the book at MaMkhize and company

Royal AM’s decision to leave left Chippa United on thie field alone at 15:00, which resulted in the Chilli Boys scoring a 3-0 walkover win which leaves them on the brink of securing their place in the top-flight next season.

Club boss Shauwn Mkhize had indicated that Royal AM would not turn up as the believed the PSL to be in violation of an order to suspend the playoffs, while the league and its officers hold a very different opinion.

Royal AM continue to assert that the PSL were in the wrong when they awarded three points Sekhukhune United over infringements of rules in the Mpumalanga club’s fixture with Polokwane City. That decision saw Sekhukhune named National First Division champions and earn automatic promotion ahead of Royal AM.

While broadcaster SuperSport have declined to comment on the fiasco, it is believed that the walkover cost them somewhere in the region of R800,000.

The PSL could very well hold Royal AM liable for any amount that the league have to return to the TV rights holders.

Soccer Laduma have reported that PSL insiders have revealed the league’s intention to throw the book at Royal AM who continue to defy their authority as the legal battle rages on.

Royal AM have another match scheduled against Richards Bay on Thursday afternoon at the same venue, but it remains to be seen whether they will turn up for the match.

The ongoing saga doesn’t reflect well on any of the parties involved as the PSL and Royal AM’s row continues to drag the reputation of South African football through the mud.