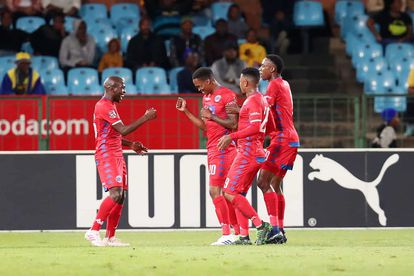 Lucas Moripe Stadium hosts the pick of the opening weekend of 2019/20 season of the Premier Soccer League (PSL), as Mamelodi Sundowns square off against city rivals Supersport United in the Tshwane Derby.

The Brazilians are aiming to kick off their title defence on a high, as they go in search for an unprecedented tenth league title in the PSL era.

For the second year running, they have a tough fixture to endure first up, having opened their previous campaign with a clash against Soweto giants Kaizer Chiefs last time out.

Revenge will no doubt be in the mind of Pitso Mosimane, as it was their neighbours who almost derailed their title chase by inflicting a 2-0 defeat on them in the same fixture, right in the business end of last season.

In the lead-up to the derby, the former Bafana coach reflected on these two sides’ encounter back in April.

“I do not like this match because it comes at a wrong time for us – we are not ready,” Mosimane said.

“When we played SuperSport last year, it was just after returning from a Champions League match in Egypt, and we lost 2-0.”

Sundowns are likely to not tamper too much with what worked for them last season, as they sport minimal changes to their playing personnel compared to the previous campaign.

To date, all players who left the club in the current window played little to no part in their back-to-back titles.

They are, however, without defender Ricardo Nascimento, who recently went under the knife, while also sweating around the fitness of fellow South American Gaston Sirino, who picked up a knock during the off-season.

As far as incoming players are concerned, the Sundowns have only confirmed one signing – Uruguayan striker Mauricio Affonso.

Their opponents, on the other hand, have made a few acquisitions in the off-season, most notably former Orlando Pirates duo Kudakwashe Mahachi and Thamsanqa Gabuza.

Matsatsansa have also been boosted by hanging on to a couple of their in-demand stars – the likes of Evans Rusike, Teboho Mokoena and Aubrey Modiba – who have all been linked with moves to Sundowns.