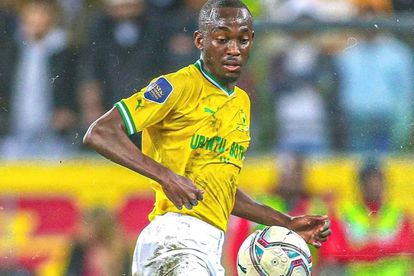 Former Orlando Pirates striker Manuel ‘Tico-Tico’ Bucuane has hailed Peter Shalulile as a ‘special talent’ for the consistency he’s had in scoring goals.

‘Sha Sha’ has found the back of the net on six occasions in eight appearances so far this season and is currently the leading goal scorer.

Bucuane, who was also known for banging goals in his playing days, says he wouldn’t be surprised if the Namibian international went on to break all Premier Soccer League records.

“He is definitely a special talent. There is no doubt that he is a special talent because we are talking about a phase in our football when we are lacking regular goal scores and here, he is doing the most difficult job on the field,” said Bucuane as per KickOff.com.

“I mean, there is a scoring crisis everywhere, then here he comes this guy who is banging them left and right.

“So, he is a special talent. I wouldn’t be surprised if he goes on to wipe off all the records in PSL because records are meant to be broken after all.

“A special talent is not about skill and dribbling. As as striker, we judge on the number of goals you score and not dribbling, especially for us players not born in South Africa who are coming here to do a job.

“We are only going to get paid if we do our job. As a striker you will be judged on the number of goals you score. You can be popular by dribbling but if you are not doing your job as a striker then it is useless.

“Sundowns is a team that plays this good football but what counts is having someone to finish all those moves and he is the one scoring the goals.

ALSO READ: ‘KAIZER CHIEFS NOT CHALLENGING FOR THE LEAGUE THIS SEASON’ – CLUB LEGEND

‘I WISH HE COULD GO OVERSEAS’

Bucuane added that this is the perfect time for the 28-year-old to grab an opportunity to move abroad while he is in his prime.

“I know they will never make it easy for him to leave because they will always offer him more to make him as comfortable as possible,” he added.

“I wish he could go overseas but if Sundowns is giving him whatever he needs at this stage of his career, then so be it though I feel he must take a chance to go and make more money elsewhere.

“In your prime, you must always try to go overseas. If he leaves while he is on top of his game he can always come back because they will always remember what he did in his best years and so they will still give him a chance again.”